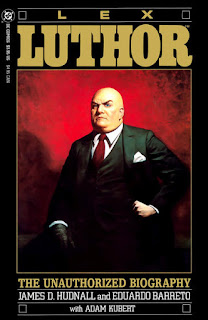 The post-Crisis reinvention of Lex Luthor was one of the more drastic alterations in the new Earth order. Under the John Byrne-helmed relaunch of Superman, the evil genius of old exchanged his jumpsuits and war suits (oh, how I loved that old war suit) for boardroom power suits — the finely tailored attire of upper corporate echelons. The labs and beakers were out the window, as were the team-ups with the Joker to carry out ludicrous schemes, and this new Luthor — still bald, still driven to dominate — left the science to employees. He morphed into a fabulously wealthy string-puller, a type all-too familiar in the Gordon Geckko 1980s which spawned him.

The new Luthor arrived on the scene fully formed, introduced in the Man of Steel mini-series that offered up the fresh origin of his arch-foe. We understood immediately why he hated Superman — he was the one man who could outshine him and who couldn’t be bought — but where this new Lex got his start was still a mystery. If he didn’t lose his hair in a tragic Smallville accident, was it just plain old male-pattern baldness that savaged his ginger locks? What other dark secrets did he hold under those new fat layers?

Lex Luthor: The Unauthorized Biography sought to answer some of those questions, and delve into how Luthor built the business empire that made him the most dangerous member of Superman’s rogues gallery. Despite the title, it wasn’t actually structured like a biography (though the cover stole a typeface and design from Donald Trump’s autobiography, The Art of the Deal). Set several years after the character’s renovation (as indicated by the Luke Skywalker glove over Lex’s prosthetic hand — NEVER WEAR A CANCER-CAUSING KRYPTONITE RING, KIDS), the story is told mostly in flashback, with a framing story that has Clark Kent accused of murder:

The Peter Sands that apparently wrote out Clark’s name as his dying act was a down on his luck writer (which puts him in the company of roughly 98% of that profession), and was living in a rathole apartment with bills pounding him left and right. He got his deliverance (which turned out to be his death warrant) when a publisher called, asked if he was working on anything, and he randomly plucked a Lex Luthor bio out of the ether because that tycoon was in the newspaper headlines that day. Now he just had to write the damn thing. This being 1989, he couldn’t use a laptop to do all his research, so he slapped on a Mr. Rogers sweater, rolled down to the public library and *gasp* went through stacks of books and microfiche — remember microfiche?:

Self-serving autobiographies and old newspaper articles only go so far, so he had to go out and track down people from Lex’s past, most of whom weren’t all that willing to talk. There was the insurance salesman that sold Lex’s father a lucrative life insurance policy, despite the Luthors living in the downtrodden Suicide Slum. There was the mechanic that certified that it was just an accident days later when Luthor’s parents were killed in a car accident. And there’s one of Luthor’s teachers, who had  her own sepia-toned memories of young Lex.

But there was someone out there who could keep him safe. Sands turned to the one man who seemed to have Superman’s ear: Clark Kent. Though Sands’ ravings sounded like paranoid delusions, Mr. Kent had his own hidden reasons to listen closely. He promised that Superman would help, but events have a way of intervening:

Alas, it wasn’t Superman who knocked on Sands’ door next. But he did get an interview with his subject. So there’s that.

James D. Hudnall’s script is solid, and Sands’ trek through Luthor’s seedy past is enjoyable. The major flaw — or so it appears to me — is that he actually uses two layers of framing stories to tell the tale. The plot opens and closes on Luthor, who has a videotape of Kent’s interrogation delivered to his Aspen chalet. Then there’s Clark’s interrogation. Then there’s Sands’ story, narrated by Sands himself. There’s nothing wrong with any of these things on their own, but the way their arranged jumbles the narrative a bit. The transitions aren’t seamless, and they make the story clunkier than it needs to be. It’s like a multi-layer cake of flashback, and it creaks and groans under its own weight. Again — this might just be me.

Luthor’s post-Crisis life story was fleshed out in a number of other places, but this book gave some indication of just how far he was willing to go to secure his future — and hide his past. It’s not on the short-list of must reads in the Superman mythos (and the big guy never even makes a costumed appearance in its pages), but it has its place in Luthorcana.