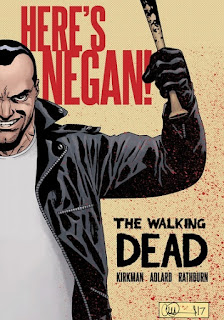 Here's Negan is a stand-alone hardcover collected edition of the "Here's Negan!" comic from Robert Kirkman's The Walking Dead comic book series. Here's Negan explores the backstory of the iconic The Walking Dead antagonist Negan during the early days of the zombie apocalypse. It was originally published and serialized monthly in IMAGE magazine in chapters consisting of four pages starting from April 2016. The hardback edition was published by Image Comics on 4 October 2017. It is 72 pages long and was written by Robert Kirkman with art by Charles Adlard, Cliff Rathburn and Dave Stewart.

Negan is such a well-written character and antagonist. In the comic, he is a loud, crass man, who has a juvenile sense of humor and isn't afraid to bully, harass and embarrass people by making offensive comments and using profane language. He is also a natural leader who is able to use his sharp wits, charming personality, sense of humor and logical mind to control and manipulate others.

In Here's Negan we see what Negan was like before the dead rose and how he reacted when the apocalypse unfolded around him. This was a great little book. It dives deep into Negan's past and explores is psyche and what makes this complicated, flawed man tick. I loved the revelation that his weapon of choice, a baseball bat covered in barbed wire called "Lucille" is named after his dead wife, who died at the beginning of the zombie apocalypse. Negan was devoted to his wife and struggled to cope with her death. Unable to deal with his grief, he hides his emotions under a cold exterior and adapts to the apocalypse by unleashing a violent and savage nature that had always been lurking inside him.

What makes Negan such an interesting character is that he has a set of ethics. He has no problem with bashing in people's head with Lucille if he thinks it is for the greater good but draws the line at rape. He also believes that the strong should defend the weak. He is a great example of a character that has shades of grey to him. He does a lot of reprehensible things, but is still strangely likable, and is a joy to read about.
Posted by John "Zanziber" Rogers at 6:00 AM
Email ThisBlogThis!Share to TwitterShare to FacebookShare to Pinterest
Labels: Reviews