Batman: Bride of the Demon

Title: Batman: Bride of the Demon 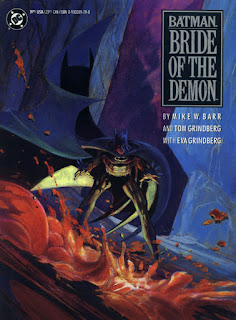 Bride of the Demon feels like a leftover story from the seventies. The environmental issue was prominent in titles written by Denny O’Neil (creator of Ra’s Al Ghul) and the art feels a lot like a blend of Jim Aparo and Neal Adams (latter being the other creator of R’s Al Ghul). I believe all of this was intentional. But there are some clues that let us know this is the nineties. One being the presence of Tim Drake (although poorly characterized), the other one is the explanation of the climate crisis. It is definitively more polished than in the seventies. The way modern readers are already familiarized with the problem.

But the plot suffers. It is hard to find a theme here. At first I thought it was about leaving a better world to our children, even if it costs us our lives, but there seems to be maybe too many plots, concepts and characters. The idea of a better future for our children can be seen on both, Ra’s and Dr. Carmody. They are doing this mostly for their kids. Although, in the case of Ra’s… he needs to create an heir first.

But this leaves some characters without a purpose. Batman in particular. And what about Dr. Weltmann, why is she doing all these things?

Another sin in this story is Batman claiming he knows he is in the southern hemisphere because the water spun the other way. Come on Batman, you should know this is not exactly true!

To me, the biggest problem here is that… we always knew Ra’s was an advocate of staring over with humanity. But the way the environmental crisis is dealt here doesn’t really go anywhere. Once the story is over, there is no aftermath. No dread of the consequences. And if you are writing a story about climate change, you kind of need to put those there, otherwise it doesn’t seem like there is a consequence. To make things worse, Ra’s Al Ghul says at some point that “we don’t have years”, implying that the end is nigh. Well, I know that all the measures taken around this period of time actually helped save the ozone (we would be in a worse situation right now), but it wasn’t enough. So, while Mike W. Barr seemed informed about some things, he didn’t really go to the library on the rest of the matters he wrote about.

And now we have two heirs, Damian and Evelyn’s son. Wonder if that story will be revived at some point?