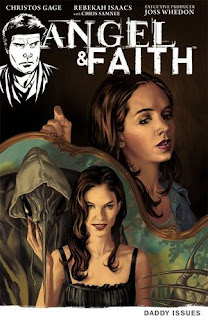 After getting out of a bit of a funk, Angel has his life on track.  He's got a purpose.  He wants to bring Giles back from the natural death that he caused.  He broke the Watcher's neck at the end of Buffy Season 8 and now he wants to make it right.  The second arc of Angel & Faith gets into some of the details of how he's planning to do that.  Angel is collecting pieces of Giles' soul through an Ancient Egyptian trinket that's currently piercing his nipple.

While on the prowl for these soul pieces, the duo comes across Mother Superior, a vampire that's making waves in London.  She's not killing anyone, nor is she siring new bloodsuckers.  Instead she's treating people for their mental illness.  It doesn't always work though.  Some people are going crazy and killing others.  Angel & Faith decide to put a stop to it only to find out that Mother Superior is actually Drucilla.  She's my second least favorite character in the Buffyverse, (The first is Harmony.), so I wasn't too happy to see Drucilla pop up.  Fortunately, author Christos Gage makes her interesting.  She's sane.  With the help of a Lorophage Demon, her madness has been cured.  Now she's doing the same for others...with mixed results.

This element brings such an interesting piece to the story of both Angel and Faith.  Both are haunted by their past and the guilt over the horrible things that they've done.  Faith once killed an innocent man and despite doing time for it, she still carries that weight on her shoulders.  Angel has a ton of skeletons in his closest from before he had a soul.  If given the chance to release that burden, would they take it?  Or is living with this guilt part of what makes them the people they are today?

To add to all of this, we're also introduced to Faith's dad.  When this was announced at NYCC in 2011, there was an audible "ooooo" and rightfully so.  Faith's father is someone that was very influential in creating her personality, but not necessarily in a good way.  She fell for the Mayor's ruse back in Season 3 due to her need of a father figure.  The introduction of this character puts things in perspective for Faith and makes her realize that she's moved on a bit.  There is a moment where she seems thankful for him to be around which seemed entirely out of character.  This was quickly swept away when she realizes that he's still the same asshole he always was.

Rebekah Isaacs drew Daddy Issues and did a fantastic job.  She has a real talent for capturing the likenesses of these characters.  They all look like the actors that portrayed them, but each has grown and matured a bit.  The Lorophage Demon is the real stand out piece in the artwork for the book though.  This thing is so friggin' creepy.  It stands in a trench coat, scarf, and hat, hiding in the shadows.  Then, when it's revealed, it pulls out a long beak-like nose and sharp, taloned fingers that pierce the brain of its victims, feeding off of their trauma.

In addition to the four-issue Daddy Issues storyline, we're introduced to Giles' great aunts Lavinia and Sophronia in Women of a Certain Age.  They've been using their mystical powers and making deals for ages to keep themselves young but now that the seed of magic has been destroyed, demons and ghouls from all over are looking to collect.  They seek refuge in Faith's home in the hope that she and Angel will defend them.  What follows is a pretty fun montage of the pair battling a bunch of different monsters in increasingly bizarre ways.  We get a little more backstory for Giles, learning about the first time he showed a talent for magic and the last time he was truly a child.

Chris Samnee illustrated Women of a Certain Age.  He has a great design for the two aunts, making them look like classic debutantes.  There are a ton of different creatures that pop up in the book and Samnee keeps them looking fresh.  No two look alike.  They're scary but still fun.  The shot of the giant snake with Angel literally halfway down its throat is awesome.

Angel & Faith continues to be the story to watch in Buffy Season 9.  The characters are spot on, both in art and story.  Each of them has a purpose.  There's something motivating them to become better people and rise above their past indiscretions.  Angel is probably always going to be a brooding mess with a ton of mistakes made over the years, but this could be the one thing he does right
Posted by John "Zanziber" Rogers at 6:00 AM
Email ThisBlogThis!Share to TwitterShare to FacebookShare to Pinterest
Labels: Reviews