Angel & Faith: Vol 1 - Live Through This 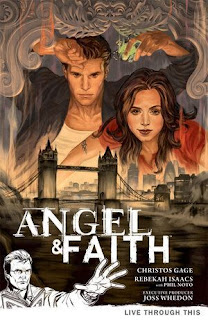 After the events of season eight of Buffy the Vampire Slayer (available only in comic book form), it was time to expand.  Buffy got a season nine, but there was more story to tell, so Angel & Faith was started.  The vampire with a soul was left a gibbering mess after coming to grips with the heinous crimes he committed while under the influence of Twilight (not the sparkly vampires, but a world-ending power), including snapping the neck of Giles.  Faith inherited all of the former watcher's things, including a scenic townhouse in London and a library of books on the occult.  She's taken it upon herself to take care of Angel seeing as how they're both a little broken.

During the Buffy TV show, I didn't really care much about Giles.  Yes, it sucked when his geeky lady friend got killed (coincidentally, also by Angel), but he was the dull adult in a series about kids killing supernatural creatures and other things that went bump in the night.  Author Christos Gage paints the character in an entirely new light, showcasing his past before he ever encountered Buffy and after the TV show ended.  Faith uncovers one of his old journals in which Giles bound a demon by sacrificing the memory of one of the best days of his life.  As long as he stayed alive, the demon was held back and the little girl it has possessed was safe.  Of course, that went to hell when Angel killed him.  This story is what snaps the vampire out of his funk.  It gives him purpose once more and he joins Faith on a trip to finish the job that the watcher started.

Angel sees this as a sign and takes up the personal mission to really atone for his sins by bringing Giles back to life.  This is a problem for several reasons.  First of all, magic is no more on Earth after the events of last season.  There are some artifacts that contain a little juice, but your basic spells don't work anymore.  The second and far scarier reason this is an issue is that Giles died a natural death.  He wasn't zapped into another dimension or cursed or some other magical thing.  His neck broke.  He stopped breathing.  He passed away.  Everything in the magic books says you can't bring someone back from that.  That's not going to stop Angel even though everyone that he meets says this is a horrible idea.

The first arc of the series, Live Through This, has the duo searching for the blood of a Mohra demon.  The Mohra appeared in the Angel TV series.  When Angel was exposed to the blood, he turned human so he figures that this might be useful for his quest to bring Giles back.  In many ways, this is a return to the Angel of old, where he's doing a bit of detective work.  Instead of working for a client, he's working for himself.  Faith is along for the ride to provide some much needed perspective.

Rebekah Isaacs illustrated this first arc and she does a fantastic job.  She nails the likenesses of the characters.  No one looks goofy and they all resemble who they're supposed to.  The various demons that pop up throughout the story are varied and pretty cool.  The aforementioned demon-possessed child is something out of nightmares.  Picture your average nine-year-old girl with about a dozen tentacles spewing from her mouth, whipping about while she levitates in the middle of the room.

The last issue of the trade paperback is a standalone story featuring the Buffyverse character I hate the most: Harmony.  She's super popular now and the leader of a public vampire movement, but she's essentially a washed up celebrity.  She turns to Angel for help as she's being blackmailed.  There's a sex tape making the rounds where she sires the dashing young lad on camera.  This would be bad publicity because she advocates against the act.  Since I cannot stand Harmony, I read this chapter as quickly as possible.  It's not a bad story, but it lost a lot of the momentum that Angel & Faith had built up until that point.  The art from Phil Noto didn't help as the characters looked flat and lifeless, the complete opposite of Isaacs's work.

Angel & Faith is a welcome addition to the Buffy storyline.  It's a spinoff that stands on its own.  You don't need to have seen the full TV series to be able to jump in, but reading the previous comics helps.  Author Christos Gage hadn't seen a single episode of either show before taking on the assignment, but he plowed through everything in a few days and manages to capture that signature Joss Whedon wit in his dialogue.  He brings a sense of humor to the story while also keeping it serious when it needs to be.   Live Through This is just the beginning of Angel's quest to bring Giles back to the land of the living.  There's a long road ahead of him and he has Faith watching his back and ready to put a stake in it should he go too far.
Posted by John "Zanziber" Rogers at 6:00 AM
Email ThisBlogThis!Share to TwitterShare to FacebookShare to Pinterest
Labels: Reviews