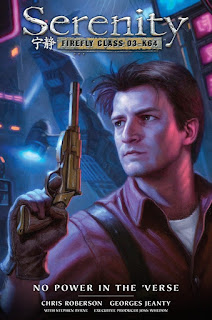 I don’t know if I’ll ever get sick of Firefly. Every time I see them appear in comic form, it gives me that warm fuzzy nostalgia feeling that every media company seems to be trying to tap into these days. Although the previous comic series have been hit or miss, I have enjoyed them enough to look forward to any new series Darkhorse puts out. This issue leans heavy on the nostalgia, spending a lot of the time checking in on the rag-tag crew, but this issue does plant a few seeds for conflicts that could have a dramatic impact on the franchise.

Whenever a new series comes out there is always a little bit of an adjustment period on my part. Each artist always takes each character design in a new direction and Georges Jeanty is no exception. But while some of the designs tend to take the characters in new directions, there are other instances where the pencils just seem a little off. Maybe a wandering eye appears in one panel, or a lack of details in a close up panel. Most of the time these small issues won’t have an effect on the panel, but when they happen to your main character, it’s the equivalent of a lead actor in a movie looking directly into the camera when giving their lines, it’s jarring and takes you out of the story. Fortunately, this doesn’t happen often and as for the rest of the issue the art is solid. The creative team has done a good job here. Serenity feels like home.

The story doesn’t offer a whole lot of new ideas, but it does lay some groundwork for what could be interesting conflicts. After a job doesn’t pay as much as they hope, the crew is requested to look into a missing person’s case. A former ally with ties to a new terrorist organization has gone missing and Mal and crew are brought in to find here. It isn’t the most original plot hook, but it will do. I was really more interested in the side plots that are taking place between characters on the ship. Zoe is portrayed as being a new single Mom on a ship that is not suited for a baby. Jean, in addition to his usual friction with the captain, also seems to be feeling a bit alienated on the ship and given his history that could spiral off into a few different directions. Meanwhile, Kaylee and Simon also show hints of trouble. It’s good to see Mal and Inara as the ships’ stable relationship. It feels like the characters are maturing in a way that feels natural and the writer, Chris Roberson, is just letting those conflicts play out on the page.
Posted by John "Zanziber" Rogers at 6:00 AM
Email ThisBlogThis!Share to TwitterShare to FacebookShare to Pinterest
Labels: Reviews