Geroge A. Romero’s Empire of the Dead: Act Two

Title: Geroge A. Romero’s Empire of the Dead: Act Two 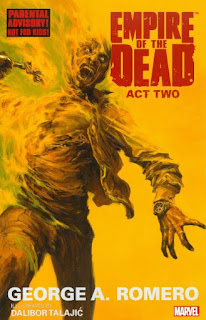 Empire of the Dead is set in a New York beset by far more problems than anyone realities. Like in any city in Geroge A. Romero’s USA, the zombies are on the streets for anyone to see, but within protected areas life goes on. Mayor Chandrake, up for re-election, sees to that, but only the chosen are aware he and his inner cabal are actually vampires. Even those are unaware that New York is a target for other forces.

An immediate difference from Act One is the change of artist from Alex Maleev to Dalibor Talajić. He’s better than Maleev when emotional drama is called for, and draws some superbly slimy men in suits, but lacks Maleev’s ability to convey the dirt and grime of a zombie infested world. Under Talajić’s watch everything looks too clean, and that’s not appropriate. Additionally, under Talajić the slimy Mayor Chandrake bears too great a resemblance to Tony Stark.

Make no mistake, this isn’t Romero using plots not good enough for his zombie movies, this is Romero delivering a plot he could never afford to make for cinema. Act One was the slow burn introduction of the cast, and Act Two ups the ante, smoldering and nudging in preparation for the bloodbath we’re expecting in Act Three. The political machinations and slow romance are largely formulaic, with the interest prompted by some zombies able to control their raging blood lust to a degree and possessing a rudimentary intelligence. Romero also investigates vampire lore, and this is less satisfactory as he changes the fundamentals considerably to suit his purposes, so no fear of garlic or a crucifix, no transformations into bats, sunlight is okay and mirror reflections are as normal. Removing some of the random sillier aspects of the traditional vampire makes narrative sense, but there’s a feeling of cheating about it. The threat to the vampires therefore comes not from the usual methods, but from a new character, a diligent and thorough police detective. A balding Columbo if you will.

The key to whether or not Romero’s movie fans will like Empire of the Dead very much depends on whether or not it’s considered acceptable that there’s actually been very little zombie action so far. Romero certainly supplies plenty of good drama via a cast it’s easy to believe in, but the zombies are very much the background, not the focus. By the conclusion of Act Two Romero has cranked up the pressure considerably, and supplied a surprising ending to lead us into Act Three. Alternatively, all three acts are combined as George A. Romero’s Empire of the Dead.
Posted by John "Zanziber" Rogers at 6:00 AM
Email ThisBlogThis!Share to TwitterShare to FacebookShare to Pinterest
Labels: Reviews