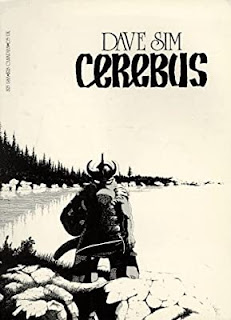 Cerebus is something of a legend in comics. Begun in December of 1977 by Dave Sim, it was one of the first entirely independent, self-published comics in a field dominated by the large work-for-hire companies like Marvel and DC. It ran for 300 issues and nearly 27 years and became one of the most influential independent comic books of all time, in part due to Sim's outspoken views in favor of creator rights and his regular use of the editorial pages in Cerebus issues to air those views. This collection (the first "phonebook") collects issues 1 through 25, with one of the amazing wrap-around covers that makes all of the phonebooks so beautiful (possibly partly by later Cerebus collaborator Gerhard, although if so it's uncredited so far as I can tell). Cerebus reliably has some of the best black-and-white art you will ever see in comics.

There is some debate over where to start with Cerebus, and a faction that, for good reasons, argues for starting with the second phonebook (High Society). While these first twenty-five issues do introduce the reader to a bunch of important characters (Elrod, Lord Julius, Jaka, Artemis Roach, and Suenteus Po, for example), all those characters are later reintroduced and nothing that happens here is hugely vital for the overall story. It's also quite rough, starting as Conan parody with almost no depth. The first half or so of this collection features lots of short stories with little or no broader significance, and the early ones are about little other than Cerebus's skills and fighting abilities.

That said, when reading the series, I like to start at the beginning. It is nice to follow the characters from their moment of first introduction, and it's delightful to watch Sim's ability grow (surprisingly quickly) through the first few issues. Cerebus #1 is bad: crude, simplistic artwork, almost nothing in the way of a story, and lots of purple narration. But flipping forward even to Cerebus #6 (the first appearance of Jaka), one sees a remarkable difference. By Cerebus #7, Cerebus looks like himself, the plot is getting more complex, and Sim is clearly hitting his stride. And, by the end of this collection, the art has moved from crude past competent and into truly beautiful in places. It's one of the few black-and-white comics where I never miss color. The detailed line work is more enjoyable than I think any coloring could be.

The strength of Cerebus as an ongoing character slowly emerges from behind the parody. What I like the most about Cerebus is that he's neither a predestined victor (apart from the early issues that follow the Conan model most closely) nor a pure loner who stands apart from the world. He gets embroiled in political affairs, but almost always for his own reasons (primarily wealth). He has his own moral code, but it's fluid and situational; it's the realistic muddle of impulse and vague principle that most of us fall back on in our everyday life, which is remarkably unlike the typical moral code in comics (or even fiction in general). And while he is in one sense better and more powerful than anyone else in the story, that doesn't mean Cerebus gets what he wants. Most stories here end up going rather poorly for him, forcing daring escapes or frustrating cutting of losses. Sim quickly finds a voice for Cerebus that's irascible, wise, practical, and a bit world-weary, as well as remarkably unflappable. He's one of the best protagonists in comics, and that's already clear by the end of this collection.

Parody is the focus of these first issues, which is a mixed bag. The early issues are fairly weak sword-and-sorcery parody (particularly Red Sonja, primarily a vehicle for some tired sexist jokes) and worth reading only for the development in Sim's art style and the growth of Cerebus as a unique voice. Sim gets away from straight parody for the middle of the collection, but then makes an unfortunate return for the final few issues, featuring parodies of Man-Thing and X-Men that I thought were more forced than funny. You have to have some tolerance for this, and (similar to early Pratchett) a lot of it isn't as funny as the author seems to think it is.

That said, three of Sim's most brilliant ongoing characters are parodies, just ones that are mixed and inserted into the "wrong" genres in ways that bring them alive. Elrod of Melvinbone, a parody of Moorcock's Elric of Melnibone who speaks exactly like Foghorn Leghorn, should not work and yet does. He's the source of the funniest moments in this collection. His persistent treatment of Cerebus as a kid in a bunny suit shouldn't be as funny as it is, but it reliably makes me laugh each time I re-read this collection. Lord Julius is a straight insertion of Groucho Marx who really comes into his own in the next collection, High Society, but some of the hilarious High Society moments are foreshadowed here. And Artemis Roach, who starts as a parody of Batman and will later parody a huge variety of comic book characters, provides several delightful moments with Cerebus as straight man.

I'm not much of a fan of parody, but I still think Cerebus is genuinely funny. High Society is definitely better, but I think one would miss some great bits by skipping over the first collection. Much of what makes it work is the character of Cerebus, who is in turn a wonderful straight man for Sim's wilder characters and an endless source of sharp one-liners. It's easy to really care about and root for Cerebus, even when he's being manipulative and amoral, because he's so straightforward and forthright about it. The world Sim puts him into is full of chaos, ridiculousness, and unfairness, and Cerebus is the sort of character to put his head down, make a few sarcastic comments, and then get on with it. It's fun to watch.

One final note: I've always thought the "phonebook" collections were one of Sim's best ideas. Unlike nearly all comic book collections, a Cerebus phonebook provides enough material to be satisfying and has always felt like a good value for the money. I wish more comic book publishers would learn from Sim's example and produce larger collections that aren't hardcover deluxe editions (although Sim has an admitted advantage from not having to reproduce color).
Posted by John "Zanziber" Rogers at 6:00 AM
Email ThisBlogThis!Share to TwitterShare to FacebookShare to Pinterest
Labels: Reviews