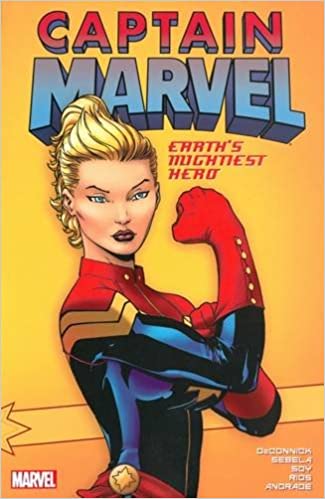 The book’s second half is exciting and well-written overall. Captain Marvel is a relatable and charismatic hero whose adventures are fun to watch. The narrative is very interesting. The artwork looks great in most places.

The opening story arc has a few problems. Some of the art isn’t that great.

The first volume in a new take on Carol Danvers proves to be a rousing success. The storyline is interesting, the action is exciting, and Captain Marvel ends up being a fantastic main character. The volume stumbles a bit at first, but even these introductory chapters are fun in their own way. Anyone looking for a good introduction to the new Captain Marvel should definitely take a look at this book.

Captain Marvel Earth’s Mightiest Hero Vol. 1, by Kelly Sue DeConnick, starts out average but ramps up the quality as the story progresses. The opening story arc deals with time travel in a way that brings in some cool history but causes the message to become a bit mixed. However, from here, things get better as the rest of the book is a fun ride filled with great characters and thrilling action. Readers have a chance to see Captain Marvel beat up bad guys while dealing out humorous quips. They also have a chance to become invested in her personal story, as DeConnick makes Carol Danvers a character that is incredibly easy to relate to. Overall, this is a wonderful read and an optimistic start to this series.

The book starts out with an arc that centers around time travel. It uses this setting to highlight the Women Airforce Service Pilots, a real group that goes unappreciated in most forms of media. This perfectly fits the feminist tone inherent to Captain Marvel’s character and gives the arc legitimacy by grounding it in real history.

However, the opening arc’s use of time-travel is a bit confusing at times and jumps around too much, preventing it from significantly contributing to the overall story. In addition, the message found in the arc’s conclusion seems different than the one it started with. In the first chapter, Carol’s reluctance to take on the Captain Marvel name is the focus, while in the final chapter her reluctance to be a hero at all is the focus. These problems prevent the opening story from being as entertaining as it could be.

Luckily, the narrative improves drastically from this point onward. Captain Marvel begins tackling smaller, but more straightforward, problems in the present. This allows for some great moments of action that showcase Captain Marvel as a hero. These moments are exciting and fun in an uncomplicated and celebratory way. All of this also allows Carol’s personality to shine, as she brings a bit of humor to each altercation.

Each of these stories also humanize Carol as a character and make her more relatable. This is a hero with insane levels of power who also lives in an apartment building and owns a cat, emphasizing the fact that, underneath her superhero façade, she is still a normal person. So when her schedule gets overbooked and she struggles to maintain the commitments she has made, it relates to similar situations in the lives of readers. All of this makes you care about Captain Marvel as a person and become more invested in her story.

This deep level of connection also helps make one of the volume’s larger narrative threads, Carol’s health issues, more meaningful. Having a superhuman character struck down by a relatively human problem is an incredibly interesting concept and furthers Carol’s status as a normal person. Giving her a problem she can’t punch her way out of also works in adding a level of diversity to the storytelling. Though the action and charm sold me on the individual chapters, this is the point that sold me on this series as a whole.

The majority of Captain Marvel Vol. 1 features Dexter Soy’s gorgeous pencils and inks. These chapters look incredible and are packed with awesome levels of detail. This detail makes both characters and backgrounds look realistic and helps bring the entire story to life. Plus, Soy’s work really helps highlight some of the action scenes, making them even more exciting.

However, there are also a few chapters here, from other artists, that don’t look nearly as good. Filipe Andrade’s heavily stylized approach looks nice in its own way but does not match the theme or tone of this comic. These chapters are also a huge departure from the art style seen in the rest of this volume, introducing a bit of a disconnect into the book.