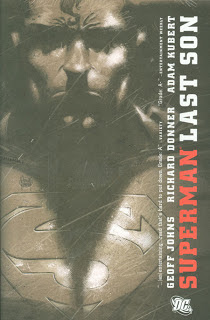 Though Up, Up, and Away is technically the first appearance of the "New Earth" Superman, I think we can all agree that Superman: Last Son, the first solo Superman outing of current series writer Geoff Johns, bears some note. DC Comics apparently thinks so, too -- though the book didn't warrant the blind front stamping that Grant Morrison's Batman and Son got, it does have an uncharacteristic matte jacket finish and printed endsheets. With 3-D glasses included, Last Son is a pretty sharp package -- but after the long delay (see Funnybook Babylon's Last Son chronology) was it worth the wait?

About halfway through Last Son, I got to thinking that the story was somewhat uncharacteristic for a first Geoff Johns storyline. As compared to his initial arcs on Flash or Green Lantern, where was the strong sense of setting, or the interweaving of character and plot?

It wasn't until the end that I got it, that in Superman's desperate fight to save Chris Kent, son of Zod, that Superman actually saw what his own life might have been like had he not been raised by the Kents. It's this personal tie that makes Last Son more than just an action story, and I look forward to how Johns continues to explore the Man of Steel.

Further, I realized after finishing Last Son that this is a Superman story I really feel confident I could give to the most basic Superman fan and they'd understand it, while it still works within mainstream Superman continuity. Whereas Johns has sometimes revamped a character's supporting cast to bring them more in line with his new take, he instead pares down the Superman cast to their basic elements: Lois, Jimmy, Perry, and Ma and Pa, and all of them are immediately recognizable by any Superman movie or TV fan. This volume includes a brief introduction by Marc McClure (Superman: The Movie's Jimmy Olsen), though Adam Kubert's Clark Kent far more resembles Brandon Routh than Christopher Reeve.

Where Geoff Johns really applies the "Johnsian effect" is to Superman's villains. General Zod has been both revamped and resurrected (the John Byrne take on the character officially retconned from existence), as now a semi-tragic figure who tried to help Jor-El save Krypton, but whom Jor-El repudiated because of Zod's violent ways. I'm not sure I necessarily needed to sympathize with Zod (nor Booster Gold, nor Black Hand), but it does offer an interesting new spin on the destruction of Krypton.

As with the new heroes that Johns briefly and effectively introduced in Justice Society: Thy Kingdom Come, Johns makes quick work of the updates to other members of Superman's rogues gallery. Metallo, without much undue explanation, now harnesses the power of a couple different shades of Kryptonite; similarly the Parasite has returned to life, and Bizarro has taken on a more feral nature. Johns also name-checks both Brainiac and Doomsday, suggesting new, yet-unrevealed Kryptonian ties for each.

So, to return to the question posed at the beginning, was Last Son worth the almost three-year wait? Well, maybe. It's certainly a good Superman story, nothing to be embarrassed about, and the accessibility of the story is a big plus.

At the same time ... former Super-titles editor Eddie Berganza once said that he could tell a Superman story was good when he could hear the John Williams Superman theme in his head while he was reading it. For a story that's supposedly co-written by Superman director Richard Donner (though Donner's immediate absence from subsequent projects makes one wonder if his role here was for marketing only), there's something of a dearth of iconic Superman moments. Indeed, even as I applaud the writers' restraint, I think this story could have handled at least one "kneel before Zod" reference -- there's nary a "nudge, nudge" or a "wink, wink" to be found here. My guess is that Last Son may hold up better in another reading; until then, I'm certainly enthused enough about Geoff Johns's Superman tenure to keep reading.
Posted by John "Zanziber" Rogers at 6:00 AM
Email ThisBlogThis!Share to TwitterShare to FacebookShare to Pinterest
Labels: Reviews