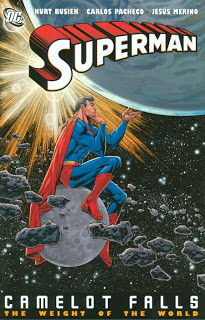 Though, again, DC Comics intended Up, Up, and Away to be the debut of the "New Earth" Superman, fans pretty quickly caught on that the real meat of the Superman relaunches was Last Son by Geoff Johns, Richard Donner, and Adam Kubert, and Camelot Falls by Kurt Busiek and Carlos Pacheco. Mostly due to delays on the Last Son side, both stories had an erratic schedule in comic form, with Superman (carrying "Camelot Falls") having to step in where Action Comics ("Last Son") fell behind.

It's obvious reading Camelot Falls that this is the more "monthly" of the two Superman titles. Whereas Last Son keeps a single focus with nary a subplot that doesn't relate to the main story, Camelot Falls is obviously a collection of issues, loosely tied under the auspices of Superman's battle with Arion. In one, Superman wrangles the Fourth World "Young Gods" run amok; in another, he fights the military Squadron K, set up to stop him if he's ever mind-controlled. I don't mind the randomness of this book, necessarily; the one thing I don't want to lose in this trade-era is the monthly, rather than even-driven, feel of comics.

The difficulty with Camelot Falls is that, in acting as a monthly storyline, the book repeats its premise over and over ad nauseum. This is, again, mostly the fault of other titles, as to accommodate everything from Last Son to Countdown, "Camelot Falls" had at least a couple (likely unexpected) breaks between its chapters, with the final chapter relegated to a Superman Annual. Still, a good volume of pages at the beginning of each chapter of Camelot Falls are taken up with Superman thinking and re-thinking over his moral dilemma, until it seems that most of the book involves Superman thinking only.

And the moral dilemma that Superman faces in this book ... just isn't that interesting. Essentially, the Atlantean sorcerer Arion (who, though supposedly a younger version of the DC hero, shares few ties with the other) claims that by protecting humanity, Superman staves off a coming crisis that will only be worse when it finally arrives. Of course, Superman immediately takes this very seriously and begins to fret about his place in the world -- except the reader knows Superman's not about to pack it in, so his resolution is obvious from the beginning. What follows are pages (and pages) of Superman alone, worrying, a throwback to the "crying" Superman pre-Infinite Crisis; in contract, Geoff Johns's Superman in Last Son is equally as intelligent, but more proactive and assured.

One area where Kurt Busiek does complicate Arion's challenge is when Superman faces off against the alien Subjekt-17. The alien, whose origin closely resembles Superman's own, claims he knows where to find the missing Arion, but will only reveal the information if Superman attacks him; Subjekt-17 had previously been tortured by humans, and would only agree to help humanity by force. In a story that constantly reminds Superman that he's not human, Subjekt-17 forces Superman to side with humanity through one of their worst traits -- violence. The ending here is still fairly telegraphed -- does anyone expect Superman not to defend humanity? -- but Busiek and Pacheco do a nice job showing Superman's horror as he must beat Subjekt-17 senseless.

The first volume of Camelot Falls moved fairly swiftly, as it went from Superman's encounter with Subjekt-17 to Arion's appearance and a glimpse into a potential future. The second volume, however, dispenses with the build-up in favor of tackling the more cerebral aspects of the problem, and I'm just not sure it translates as well. Last Son, on the other hand, is a far more accessible Superman story that uses a familiar cast of Superman's friends and villains; Busiek and Pacheco do an admirable, artful job with Camelot Falls in a story that represents Superman well, but never quite achieves an epic feel.
Posted by John "Zanziber" Rogers at 6:00 AM
Email ThisBlogThis!Share to TwitterShare to FacebookShare to Pinterest
Labels: Reviews