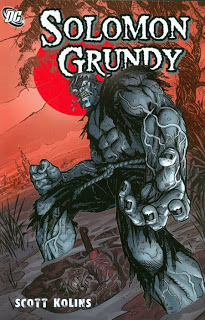 If someone had told me I'd be reading a story where Solomon Grundy, the alabaster-skinned, zombie-esque simpleton, was fighting Bizarro, that most backwards foe of Superman, I'd have run, not walked, to the comic store to see it. And, truth be told, that particular encounter and the use of Bizarro in this book was pretty fun; a Legion of Doom reunion, if you will. In fact, the fighting (vs. Poison Ivy, Amazo, the Demon Etrigan, and more) and characterizations are spot-on and enjoyable.

The problem with this Solomon Grundy story is twofold:


So, in a sense, Kolins was dealing with a deck loaded against him. But, like I said, the fights and characterizations and situations were fun and well done. It's just the connecting threads concerning Gold that left me cold.

There's actually a third story-centric problem that screams of editorial mandate, and that's the appearance of a Black Lantern ring at the end, heralding the beginning of DC's recently completed Blackest Night event. This is a case where that end note took me out of a story I wasn't that invested in to begin with.

On another less than positive side, the coloring seems off to me—garish and off-putting, with too much orange. Whether or not that's by design, it made the book a little harder to read.

With the negatives out of the way, let's get into what's good. First and foremost, I love Kolins' art, and this book is no exception. He ably skirts a line between gravity and goofiness in his figures; his storytelling is kinetic, well-paced, and top notch.

Again, while some of the story beats where a little meh, the dialogue and characterization, especially of familiar DC icons, is well done. I do like this book, especially for DC Comics fans; but I'm not so sure about its appeal to random readers.
Posted by John "Zanziber" Rogers at 6:00 AM
Email ThisBlogThis!Share to TwitterShare to FacebookShare to Pinterest
Labels: Reviews