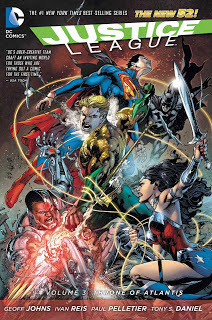 Writer Geoff Johns pares down the cast such to focus on a few very specific characters and relationships, and it brings some welcome depth to the book (not to mention the story's aquatic antagonists). With the most recent Aquaman collection, that title has been on an upswing, and it buoys Justice League along with it in this crossover.

Throne of Atlantis's first two issues explore the relationship between Wonder Woman and Superman, and the over-protectiveness Diana feels toward the League and her friends, including Steve Trevor. Johns's kiss between Superman and Wonder Woman in Justice League Vol. 2: The Villains Journey was wholly unconvincing, as it was meant to be; in Throne, Johns has the characters back up and get to know one another better, and what emerges is a believable basis for their attraction. Superman finds someone who understands his responsibilities; Wonder Woman learns how to have a private life amidst her superheroics. Johns's Wonder Woman is a wholly different character from Brian Azzarello's portrayal in the main series; while I like Azzarello's portrayal, I'm curious here for the first time what a Johns-written Wonder Woman series might be like.

Toward the end of Villain's Journey (and even in part since Justice League Vol. 1: Origin), Johns has built up to a confrontation between Batman and Aquaman over leadership of the League. We've seen League leadership fights before (most notably in Justice League International) and I worried this would devolve into a fistfight or a schism within the League, a story told already too many times. While Batman and Aquaman do come to blows, surprisingly they later each admit their own errors and reconcile.

It's perhaps a shame that Batman and Aquaman each accepting fault should be so surprising -- in our fiction and in the real world, we more commonly see factions schism than compromise -- and Johns's less angsty, more reasonable solution is welcome. Also, Batman and Aquaman is not a team-up we often saw in the entirety of the post-Crisis on Infinite Earths DC Universe, and Johns succeeds in giving them a conflict where both have a natural role and would logically work side-by-side.

Finally, Johns gives Cyborg a wrenching decision in these pages that, as much as I'm curious about a Johns-penned Wonder Woman series, makes me wonder what Johns could do with Vic Stone, too. Coming out of Villain's Journey, Vic is increasingly concerned about losing his humanity -- he wonders even if his consciousness might simply be a computer program that believes itself to have been human. Vic's scientist father offers him an "upgrade" that would allow Vic to survive harsh climates, but at the cost of his one remaining lung. Vic opposes the change initially, but as soon as he needs the upgrades to rescue the League, Vic agrees -- even as the audience stands shocked at his sacrifice. Vic has been a cypher in the first two League volumes, but here we understand his capacity for heroism. If the Justice League title lacked heart before, it has it now.

Following from the excellent Aquaman Vol. 2: The Others, in which Johns resurrected and defined Aquaman nemesis Black Manta for the ages, he gives the same treatment to Ocean Master here. As is Johns's wont, Ocean Master is no cookie-cutter foe, but actually a passionate ruler of Atlantis who legitimately believes his city has been attacked. Even better, Ocean Master turns out not to be the story's true villain; rather, Johns plays on our pre-Flashpoint sympathies, reintroducing a beloved character and then having him turn out to be the mastermind behind the Atlantis war. This was clever on Johns's part and caught me by surprise, and it's a stark reminder that while some names remain the same, the New 52 characters are not the same as their predecessors.

Jim Lee departs art duties on Justice League before this volume, replaced by Ivan Reis (coming over from Aquaman); Paul Pelletier replaces Reis on the other title. I've come to associate Reis's work with Aquaman now, and his presence here on Justice League helped make the story feel less like a crossover and more like the next issue of a Aquaman/Justice League title. I have enjoyed Pelletier's work on such titles as Superboy and the Ravers, though I'll need a bit longer before I agree he's right for Aquaman; Pelletier's sunnier, smoother style doesn't convey the seriousness of the Justice LEague or Aquaman the way Reis and Lee did, and I'm not convinced the Aquaman title is the better for it.