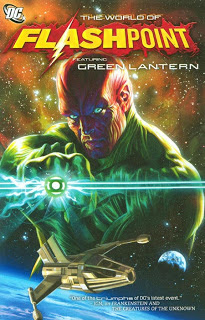 World of Flashpoint Featuring Green Lantern offered some of the strongest Flashpoint tie-in miniseries so far, faltering only unexpectedly at the end. In addition to stories about Green Lantern characters Abin Sur and Hal Jordan, and Green Arrow, this World of Flashpoint volume also debuts writer Jeff Lemire on the Frankenstein character that he'll subsequently write in the DC New 52 (what ties all these stories together, perhaps, is that "it's not easy being green").

For the first few stories, for Lemire's Frankenstein, and for a brief nod to what the term "Flashpoint" might mean for the DC Universe going forward, Green Lantern ranks for me as the second-best Flashpoint tie-in collection, behind Batman but before Wonder Woman and Superman.

I thoroughly enjoyed Adam Schlagman's Abin Sur: The Green Lantern miniseries that started off this collection, perhaps because of all the Flashpoint tie-ins, it felt the most familiar -- like Abin Sur's back-story, instead of his alternate life. This is due largely because Schlagman mines the rich mythos Geoff Johns has created for the Green Lantern title of late; the Project Superman miniseries had nothing to do with ongoing events in the Superman titles, but Abin Sur is full of Atrocitus and White Lanterns and the untold romance between Sinestro and Abin Sur's sister, and on and on.

One gets the sense of things hinted at here later to be revealed in the Green Lantern title, rather than simply an "Elseworlds" tale that plays on Superman or Batman's tropes.

Not only is any story fun where the writer plays Sinestro as an anti-hero, but Schlagman also has Sinestro investigating "the prophecy of the Flashpoint." Other titles have addressed "the Flashpoint," mainly Legion of Super-Heroes, and popular wisdom has it that "Flashpoint" being a thing is a holdover from what the miniseries was meant to achieve prior to its use introducing the DC New 52.

Here, we learn a Flashpoint is "a moment in time that changes everything moving forward," which makes sense both in this context and that of the Legion's time travel. Possibly, DC could decide that all of their continuity-changing events so far have been "Flashpoints"; tied perhaps into the upcoming Pandora story will be some unification of Crisis on Infinite Earths, Zero Hour, Infinite Crisis and so on all as Flashpoints, a kind of unified continuity-changing theory similar to Hypertime; if so, this will make the Abin Sur miniseries very key indeed.

Abin Sur was good enough that it's surprising that Schlagman's Hal Jordan miniseries that ends this collection is so dull. Hal Jordan is a character with plenty of complexity, but Schlagman glosses over the fine details; Hal changes, seemingly (but not explicitly) because of Abin Sur's influence, but Hal's self-sacrifice in the end seems more about daredevil notoriety than an inspiration to save the world.

When Carol Ferris finds Hal's engagement ring in the end, I couldn't quite recognize it as a natural outgrowth of the character we'd been following for three issues. A lot of the miniseries is taken up with airplane battles; there's nothing wrong with that per se, but these were not so exciting, nor did the time in between reveal more about not-Green Lantern Hal Jordan's character than you would expect. Again, it's a disappointment mainly because of how well Schlagman brought Abin Sur to life in the beginning.

On the other hand, I would call Vertigo editor Pornsak Pichetshote's Green Arrow Industries one-shot one of the high points of the Flashpoint tie-ins. With a nice amount of humor, Pichetshote introduces a young Oliver Queen who's not an archer at all, but rather the CEO of a munitions corporation specializing in super-villain weaponry. I don't, as it is, object to a flashier take on Green Arrow that's more Justin Hartley than "old man with a goatee" (a look that has become even more improbable as time's gone on, even for comic books); adding to that the concept of a hero who takes weapons from super-villains is quite interesting to me.

Pichetshote goes a step further here, however, to take up the idea of corporations as entities, either for good or evil. Queen Industries, in the story, is doing kind of bad -- or at least poorly thought-out things -- but Pichetshote tries to differentiate between the institution and its actions; often a "big corporation" in comics turns out to be evil, but Pichetshote warns that's a stereotype, not a constant fact. The story never gets around to actually deciding what a "superheroic corporation" would consist of, but it's another reason I wouldn't mind reading more of Pichetshote's Green Arrow, to see how it all plays out.

I'm still overjoyed that Frankenstein received a DC New 52 series, so I'm almost inclined not to gripe at all about Jeff Lemire's Frankenstein and the Creature Commandos here. Any screen-time for Frankenstein is good, and Lemire makes this Frankenstein an agent of SHADE just like the DC New 52 and Seven Soldiers of Victory incarnation, so it's not hard to ignore the fine details and enjoy this story as a continuation of what came before and a lead-in to what's next.

Lemire can hardly be faulted for not living up to the truly weird Seven Soldiers miniseries by Grant Morrison and Doug Mahnke -- that's setting the bar rather high -- but there's neither the "Frankenstein fights a possessed town" nor "Frankenstein does battle on Mars" aesthetic that really puts a Frankenstein story over the top. There's more focus here on the Commandos than on Frankenstein, but I'll give Lemire the benefit of "just warming up" and look forward to the real show in the DC New 52.
Posted by John "Zanziber" Rogers at 6:00 AM
Email ThisBlogThis!Share to TwitterShare to FacebookShare to Pinterest
Labels: Reviews