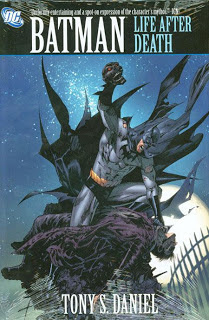 Skeptical as I had once been about Dick Grayson's role as Batman, Grant Morrison and Judd Winick went a long way toward convincing me that the idea could work, and Tony Daniel cements it. Daniel's Grayson-Batman has not the edge of the Wayne-Batman; he falls into a number of different traps and doesn't seem necessarily surprised with himself for having done so. A young boy who helps Grayson gets killed, and Grayson's reaction is neither too emotionless nor too vengeful, as Bruce Wayne might have been; instead, in a small moment, one senses that Grayson mourns the child both for how the child reflects himself and how the child reflects his fallen mentor.

Grayson's battle against Black Mask in this story is a team effort, involving Alfred and Robin, but also to a large extent Huntress, Oracle, Catwoman, and Commissioner Gordon. The Bat-family shows a level of teamwork that we haven't seen previously -- a variety of heroes came to Bruce Wayne's aid during Batman RIP, but it was nothing to the extent of Catwoman as Grayson's informant or Huntress watching his back to foil a thief. Though it's not stated explicitly, I think Daniel even wants us to intuit that Gordon knows this isn't the original Batman and assists him accordingly. Dick Grayson is the Batman prince, essentially, being assisted by his forebear's couriers to accept rule of the kingdom. Helped immensely by Daniel's art -- which looks enough like Jim Lee's to give this entire whodunit airs of Hush -- Life After Death is swift and fresh and makes Bruce Wayne as Batman, frankly, feel a little stodgy.

I'll admit Tony Daniel had me guessing right up until the end as to the identity of Black Mask. (See how a bunch of nice Collected Editions readers discussed essential "Batman: Reborn" with me while tiptoeing around said spoiler.) Black Masks's identity in retrospect is fairly obvious (Brad Meltzer's theory of "who benefits" wins again), but I stuck for a long time with the answer being Arnold Wesker, the deceased Ventriloquist (despite that we just saw his corpse in Blackest Night) with a few quick detours into thinking it was Two-Face. Daniel writes a cogent Batman mystery, complete with viable clues and red herrings; at times it seems the Batman series has to be either a superhero title or a mystery one (Morrison's Batman and Robin being more the former, Paul Dini's wonderful run on Detective Comics being more the latter), so Daniel's good combination of both is a breath of fresh air. Here again, it's hard not to find good parallels between Life After Death and Hush, especially if you liked Hush as I did.

To that end, it's perhaps no coincidence that Daniel pays homage to Hush writer Jeph Loeb's Batman: The Long Halloween early in Life After Death, bringing that series firmly into continuity at least for the time being. Daniel returns the gangster Mario Falcone, balancing out Batman's often predictable rogues. Not only does Daniel leave unclear whose side Falcone is on, it also looks like he'll revisit the question of Catwoman's true parentage as presented in Loeb's Dark Victory. In fact, Daniel's story is full of these kinds of touches, from the villain Fright last seen in Winick's Batman: Under the Hood, to the Reaper from one 1971 Dennis O'Neil Batman issue (#237, also an unofficial DC/Marvel crossover). I did not expect this level of detail from the writer of Battle for the Cowl -- was shocked by it, frankly; Life After Death went a long way in building for me a new respect for Tony Daniel's work.

Daniel's final two chapters of Life After Death focus on the Riddler with art by Guillem March, reminiscent of Francis Manapul. The story is rather confusing; aside from a suggestion that the Riddler remembers that Batman is Bruce Wayne and senses the current Batman isn't Bruce, I couldn't exactly say what else we're supposed to take from it all. I trust, however, that the Riddler is someone Daniel intends to come back to; the Reaper doesn't have a truly important role in Life After Death either, but I'll spot Daniel some extra characters as he builds what's starting out as an impressive Batman run.
Posted by John "Zanziber" Rogers at 6:00 AM
Email ThisBlogThis!Share to TwitterShare to FacebookShare to Pinterest
Labels: Reviews