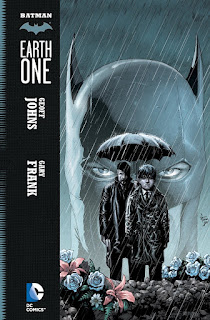 This retelling of the Batman mythos shows a universe where the Wayne family enters into the seedy world of Gotham politics, and when the opponent is Oswald Cobblepot, nothing is off limits, including murder, and that’s where this story gets really interesting.

Each version of the death of Bruce’s parents shows a child that is genuinely traumatized by the event, and this one is no different. Except in some portions of the story, he comes off as bratty, thinking he’s above everything, and that’s probably not the best thing to do when you’re rich and about to be robbed and/or your family is about to be murdered by a mugger.

The story shows Batgirl in her formative years, and I thought it was interesting how the writers portrayed her character. She’s definitely a free spirit, and it would have been nice to see her character progress beyond the two books. The character that probably intrigued me the most was the serial killer Birthday Boy. The character itself resembles probably one of the creepier elements that Gotham has to offer, and I was most fascinated by his appearance as he looked like a mashup of Bane and Scarecrow with a party hat with the modus operandi of Mad Hatter.

The story was an interesting retelling of the original Batman mythos. I was surprised how Alfred was depicted as a grizzled, ex British soldier. Aside from Sean Pertwee’s performance as Alfred in Gotham, the character has generally been depicted as more reserved and far from being physically imposing, so that was refreshing. The story was good, the artwork was impressive, and the flow was good as well. The only thing I did not like was how Harvey Bullock was depicted. Every depiction of Bullock was one of a cop that was down on his luck, and while this was no different, the writers could have done a better job of depicting a character who actually looks like he’s been around the block a few times. Bullock looked too much like how Hollywood would depict a police detective, and that turned me off to that particular character. He looked too much like an actor and less like a cop, which are not Harvey Bullock characteristics. Overall, a good story, and a must-have for any Batman fan.
Posted by John "Zanziber" Rogers at 6:00 AM
Email ThisBlogThis!Share to TwitterShare to FacebookShare to Pinterest
Labels: Reviews