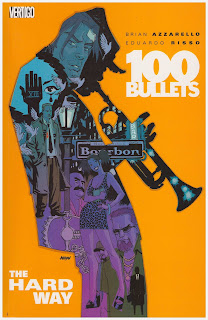 To this point Wylie Times has been a pretty likable guy. There’s not much ambition to him, and he may drink a little too much, but he has a conscience and a sense of what’s wrong and what’s not. Despite Shepherd’s best efforts, though, Wylie is one former Minuteman who’s not yet fully thrown off his constructed life, and Dizzy, accompanying them since the excellent Mexico trip detailed in A Foregone Tomorrow, is finding it difficult to believe he was ever capable.

The Hard Way opens by introducing a member of the Minutemen not previously seen, who delivers the origins of the Trust amid a heist gone seriously wrong. It’s slim, but more than balanced by the title story, the longest yet run in 100 Bullets. It’s an exceptional piece. Wylie and Dizzy are making some connection when they witness a gruesome murder across the bay, too far away to intervene. Wylie has friends in New Orleans, one of whom owes him in major fashion.

In the course of working out his present day problems, Wylie also considers his past. He loved a woman in New Orleans, and she died. This was in circumstances involving Shepherd, someone else stripped back a little here, and it’s still raw. This isn’t a linear narrative, even in the present day, so there may be some initial confusion, but that rapidly evaporates as Brian Azzarello delivers another crime noir masterpiece. There are several candidates to fill the role of the tragic victim, one excellent plot revelation, one even better bombshell, and the desperate tension is maintained from start to finish when a mantle is inherited. All in all it’s the finest story to date in an exceptional series, which continues with Strychnine Lives.
Posted by John "Zanziber" Rogers at 6:00 AM
Email ThisBlogThis!Share to TwitterShare to FacebookShare to Pinterest
Labels: Reviews