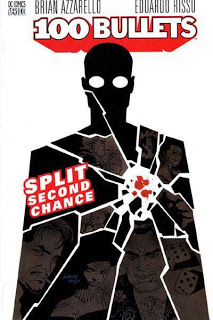 Somewhere along the way your life has been ruined.  All those hopes and dreams smashed to pieces by the cruelest fate.  Now you're a shadow of your former self and wallow in self-pity.  Along comes Agent Graves with an offer you can't refuse.  He gives you a briefcase containing an untraceable gun, one hundred untraceable bullets, evidence proving the person who ruined your life is guilty, and the sure fact you'll never be convicted.

Short Con, Long Odds - Chucky and Pony are two childhood friends who grow up on the wrong side of the tracks.  Chucky ends up being an expert gambler with a knack for dice, but he does a long stint in prison ruining his chance to make a lot of money.  Pony spends that time building a rep and getting paid. Now Chucky is out and trying to make a name for himself, but things aren't going so well.  Agent Graves shows up to reveal who is responsible for Chucky's imprisonment and make an offer he can't refuse.  Things get ugly.

Day, Hour, Minute...Man - Agent Graves meets up with an old friend and we learn a few details about his past.  He's not a man you want to cross.

The Right Ear, Left in the Cold - Cole Burns sells ice cream in the neighborhoods.  He also sells stolen cigarettes and is connected to the local mobster, Goldy Petrovic.  Another ice cream seller is trying to horn in on his territory, but Cole is too busy making time with his girlfriend.  Agent Graves shows up with a briefcase and evidence showing the person responsible for burning the old folks home his grandmother lived in.  Guess who?

Heartbreak, Sunny Side Up - A woman works in a diner and mourns for her lost little girl - she ran away to the city and never came back.  Agent Graves shows up with a briefcase and evidence revealing why her little girl ran away.  The truth hits close to home.

Parlez Kung Vous - Dizzy Cordova gets sent to Paris by Shepard to meet up with a man named Branch.  Seems like Branch got the same offer from Agent Graves that Dizzy acted upon (in the first volume).  We learn about a longstanding secret organization called The Trust and about the Minutemen. Dizzy meets Cole Burns.

Risso does a great job of artful storytelling, Azzarello's writing and dialogue are good, grander mystery of The Trust and Minutemen is revealed, covers by Johnson are interesting

Briefcase deal is a high-concept one-trick pony, many short stories, some implausible situations, no explanation on how Dizzy knows all sorts of martial arts, seems implausible Agent Graves would have carte blanche to perform his little tests - even if he has major connections

Azzarello and Risso gel as a team in these pages and deliver some good storytelling.  I was genuinely interested in what happened next in the story arcs.  You must read the first volume to get a full understanding of the events in this volume.   If you liked the first volume then you'll enjoy the second (especially if you buy into the conspiracy backdrop).  I'll check out the third volume to see where this all goes and knowing the series ends at one hundred issues reassures me an answer will eventually be given.
Posted by John "Zanziber" Rogers at 6:00 AM
Email ThisBlogThis!Share to TwitterShare to FacebookShare to Pinterest
Labels: Reviews