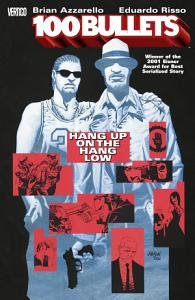 In volume one we were introduced to minor league loud-mouthed gangsters L’il Moe and his father Big Moe, and they’re back here, but as corpses and examples of the attention to detail required to follow Brian Azzarello’s complex and brilliant crime series.

Hang Up on the Hang Low features several archetypes familiar to readers of crime fiction. There’s the guy in well over his head, two here actually, although one remains blissfully unaware. There’s the down at heel loser who thinks he’s escaped, the woman on her last chance, and the predatory gangster, seemingly beyond vengeance and certainly beyond redemption. One of them eventually makes a mistake leading to inevitable and fatal consequences. It’s a heady cocktail, shaken, then stirred.

The man with the swizzle stick is Agent Graves, revealing himself here as both the complete bastard we suspected, and also a man who sets events in motion without any certainty of the outcome. Handing out a gun with untraceable bullets along with evidence that the recipient has been wronged turns out to have random consequences, and Graves adapts accordingly.

At the heart of this superb, Eisner Award-winning story is Loop Hughes. He’s in his early twenties, abandoned by this father during childhood, although whether or not a father figure would have given direction to his drifting lifestyle is open to question. Beyond a lack of motivation, Loop is fundamentally decent. He’ll take a crooked opportunity that slaps him around the face, but has a basic caring nature, and much of his perceived character is front. He’s extremely well delineated by both Azzarello and artist Eduardo Risso, the latter managing to convey Loop’s eventual inner strength. Loop meets Graves early and is taken on quite the journey.

Risso is once again superb. The effort taken on panels merely required to set scenes puts other artists to shame. A bar is prominently featured, over several chapters, and it’s consistent throughout down to the taps. When two characters meet at a different bar they’re initially seen in the background as in the foreground Risso has drawn a trio of regular patrons, each designed so well that their character is conveyed in a single panel. With the effort expended, they could be supporting characters, but they’re just local color.

Azzarello concludes his tragic story not so much with a twist of the plot, but a twist of the knife to the gut. At five chapters it’s both the longest and the best story in 100 Bullets to date, infused with seedy urban desperation and an overwhelming air of impending tragedy. The fantastic element is that there is far more to come, equally or almost as good, and the next does of goodness is A Foregone Tomorrow.

It should also be noted that with this volume Patricia Mulvihill begins coloring the series to great effect. Whereas the previous books had utilised the distressingly familiar Vertigo palette of shades of brown, Mulvihill endows Risso’s work with a greater power through far more imaginative application of color.
Posted by John "Zanziber" Rogers at 6:00 AM
Email ThisBlogThis!Share to TwitterShare to FacebookShare to Pinterest
Labels: Reviews