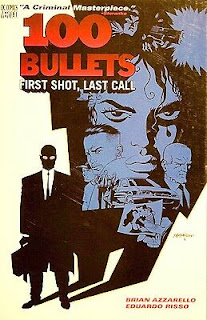 You are alone, sat at a bar or on a bus, when a dark suited man comes up to you and sits opposite. He tells you that he knows of the injustice in your life – and that you are right to feel vengeful and aggrieved. He then takes out a photograph and hands it you – some names and addresses are scrawled on its back – it is a photograph of those who have done you wrong. Finally, he opens an attaché case that contains a gun, a Smith and Wesson automatic, and 100 untraceable bullets. They are enough to right any wrong, enough to get revenge. As the man leaves you, he leaves the attaché case behind. It’s up to you now: vengeance is yours if you want it. What would you do?

This is the intriguing premise behind the 100 Bullets series of graphic novels by writer Brian Azzarello and artist Eduardo Risso. In 100 Bullets: First Shot, Last Call, the first volume of the series, we get the opening five issues of the original comic, which makes for two complete stories.

“100 Bullets” is the story that begins the series. Dizzy is a Hispanic woman newly released from prison. While she was inside, her husband and son were gunned down in a drive-by and she blames herself for their killing. The aforementioned guy in the dark suit (his name is Agent Graves, but he doesn’t tell her that) approaches her with the identities of the two killers. Both are cops, but the true culprit – the finger man, the intelligence behind the hit – is someone closer to home.

In this second story we also learn a little more about Agent Graves himself, his past and his possible motivation. It seems that he’s a predator, a hit man who uses others as his proxies. Still, much mystery remains. Who is this dysfunctional Dick Tracy? How does he select his victims? Why has he assumed the twin role of ministering angel and devilish tempter?

As in their previous outing, Johnny Double, the collaboration works well. Brian Azzarello’s story is top-notch and is written with a street dialogue that even Elmore Leonard might envy. Eduardo Risso’s artwork is evocative and vivid. He can paint a bleak cityscape of housing projects and basketball courts, move from the milieu of a barfly to a yuppie beau monde with ease, or mainline you with a collage of images to convey dream and memory. Following his artwork here is rather like watching a stylish movie in slow motion: you have the time to contemplate and appreciate each frame (or panel) in turn, and at your own pace.
Posted by John "Zanziber" Rogers at 6:00 AM
Email ThisBlogThis!Share to TwitterShare to FacebookShare to Pinterest
Labels: Reviews