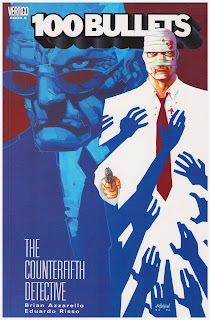 One Milo Garrett has been hospitalized following an unrevealed set of circumstances, and was seen in A Foregone Tomorrow receiving the now familiar attaché case from Agent Graves, a scene re-run in greater detail here. He returns to Los Angeles with his face completely bandaged, and to his trade as detective. It’s a career he really enjoys. In fact he wraps himself in the myths and clichés from the hard-boiled narrative to the hard drinking and the constant hard fighting. One might almost consider he’s trying a little too hard to be the man he is.

By now we have a greater familiarity with the characters important to 100 Bullets, and so are one step ahead of Garrett to start with, but then he’s dragged from pillar to post in order to locate a stolen painting. In his wake he leaves corpses, and his path is scattered with beatings. The painting is pivotal, and when Garrett eventually sees it for the first time it awakens something in him.

The Counterfifth Detective is no linear path. Brian Azzarello’s plot is the literary equivalent of those electrical cords behind your computer. It takes some consideration to discern the assorted relationships and contacts, and such is the deliberate level of deceit and manipulation, and the muddied nature of the series, that you could still be wrong. Still, with 100 Bullets the journey is what counts, and there are enough sparkling stopping points here, particularly the well-juxtaposed dialogue.

Eduardo Risso’s on his usual stunning form as well. He’s excellent at filling backgrounds as outlines, creating the impression of supplying more than is delivered, and of populating the pages with the most careworn citizens the city in focus has to offer.
Posted by John "Zanziber" Rogers at 6:00 AM
Email ThisBlogThis!Share to TwitterShare to FacebookShare to Pinterest
Labels: Reviews