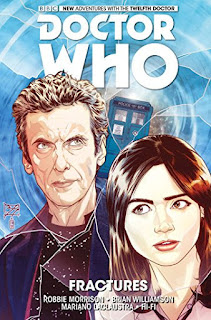 After their adventures in India, the Doctor and Clara return to her present – but danger is slipping through the cracks between universes, and London (and UNIT!) have no defence against the Fractures! Will the Doctor risk all of reality to reunite a family – or sacrifice a good man to keep the multiverse spinning? Then, the Doctor gambles with his life in 1960s Las Vegas, as he and Clara must team up with gangsters in order to defeat an intergalactic crime syndicate – but is this one too many spins on the Doctor’s roulette wheel?

The second trade collection which badges up Doctor Who: The Twelfth Doctor comic run issues 6-10, following on from the previous ‘Terrorformer’, the second volume ‘Fractures’ collects three distinct stories of The Doctor and Clara Oswald, set roughly during the eighth season of Doctor Who when Peter Capaldi’s Time Lord took to the galactic stage, and on the whole the collection is a delightful mix of some very different, and very modern Whovian tales.

‘The Fractures’, covering issues 6-8 of the comic and from which this trade collection takes its name, is the longest central story from writer Robbie Morrison and artist Brian Williamson, which sees the Doctor and Clara in modern day London (modern day as in 2014), investigating a case very close to Coal Hill School, where of course Clara teaches. Morrison’s tale feels in the vein of S8’s ‘The Caretaker’, with the Doctor as the eccentric school employee who Clara hangs around with and drags schoolgirl Lisa Foster, one of Clara’s students, into battling the titular Fractures; creatures who exist within the void between the so-called ‘multiverse’, acting when the fabric between universes is breached.

Morrison’s reason for such a breach is a very human family story, in the best traditions of Who, and he manages to balance a great depiction of the more severe, alien Doctor played by Capaldi and his dynamic with Clara alongside some genuinely interesting monsters (though they’re variants on what nuWho has done before), throwing Kate Stewart and UNIT into the mix (as Steven Moffat tends to do in most present day stories) and even manages to get callbacks to the Battle of Canary Wharf in nuWho S2 in there. All in all, it’s a really fun, well written and often gorgeously drawn three issue tale which captures the essence not only of modern Who, but also S8 and Capaldi’s first season as the Doctor.

The second story in the collection is ‘Gangland’, again written by Morrison and drawn by Williamson alongside Mariano Laclaustra, covering issues 9-10 of the comic run, which turns out to be a fun and frothy romp through the 60’s. You know what this one reminded me of? Star Trek fans will appreciate this – the Deep Space Nine episode ‘Our Man Bashir’, with its fusion of The Man From U.N.C.L.E. style kitsch and an added dose of alien invasion in the mix. The Doctor and Clara arrive in Las Vegas to see Frankie Seneca & the Wolf Pack play (there must have been a contractual reason why the Rat Pack couldn’t have featured here, as Frank Sinatra, Dean Martin & Sammy Davis Jr. absolutely show up, just with different names), only to get caught up with Mafia mobsters, disgraced boxers and the octopus-like Cybok Imperium who have a very powerful Time Lord weapon and a stranglehold on the 60’s American underworld.

Amidst lots of Vegas glitz Williamson & Laclaustra clearly have a whale of a time drawing (including the Doctor in a Mad Men-style hat), Morrison himself enjoys throwing in lots of references to the 60’s, easy listening, sports and playing on the Doctor’s enjoyment of gambling & trickery, playing games he’s pretty certain he can win. It lacks the emotional depth or scare factor ‘The Fractures’ had, but that’s fine – ‘Gangland’ is one of those nice, throwaway, fun Who episodes you can sit back and soak up, and when it’s as well written & drawn as this, you’ll almost wish they could have actually made it into an episode of the show.

This trade collection is completed by ‘The Body Electric’, written by George Mann, drawn again by Laclaustra and printed in the Free Comic Book Day 2015 compendium rather than being an issue in the ongoing series. It still features the Twelfth Doctor and Clara, but it’s a much much more smaller ‘minisode comic’, if you like, which begins with Clara questioning – what sort of companion is she? It’s a nice little opening query which Clara answers neatly by the end of this short but sweet piece about a Quartz planet, unscrupulous miners, and sentient beings which may unwittingly be the victims of electricity. Laclaustra has fun depicting a planet made out of Quartz while Mann manages to deliver a told story, replete with villain, all in just a few pages – no mean feat. It caps off ‘Fractures’ as a collection quite nicely.

Altogether encapsulating two really strong outings for the Twelfth Doctor and Clara, set roughly during the eighth season of Doctor Who, ‘Fractures’ is a trade collection well worth your time if you want a memorable, and genuinely really well characterized dose, of the Doctor and Clara, especially now their partnership is no more (SPOILERS!). If you haven’t been picking up the Twelfth Doctor’s comic adventures weekly, do yourself a favor and grab this trade – you can jump in and enjoy them as you would most standalone Who episodes.
Posted by John "Zanziber" Rogers at 6:00 AM
Email ThisBlogThis!Share to TwitterShare to FacebookShare to Pinterest
Labels: Reviews