Doctor Who: The Eleventh Doctor Vol 4: The Then and the Now

Title: Doctor Who: The Eleventh Doctor Vol 4: The Then and the Now 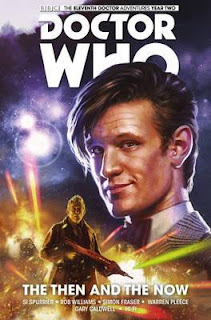 That’s not to say that the concept and narrative thrust that the War has given post-2005 episodes of Doctor Who is not brilliant – it most certainly is – but sometimes it’s better to look at characters in the dust once it’s settled, rather than when it’s blowing upwards and outwards; it can lead to brilliant character development.

That’s partly why The Then and The Now is such a wonderful volume of Eleventh Doctor comic strips, it deals with a crime that the Doctor may or may not have committed during his War incarnation. One that he can’t remember and vehemently denies, as best as he can with his memories from the era somewhat hazy.

Cue a TARDIS chase across the Universe with a very different kind of bounty hunter on the crew’s tales and no, that’s not Abslom Daak: he’s already aboard the TARDIS and ready to kill just about anything in sight. The eponymous villain of the piece, The Then and The Now, is quite a terrifying creation. A being that is not a being. Something that does exists and doesn’t at the same time. It can’t be stopped or reasoned with or even outrun, it would seem. Which gives the Doctor one choice, to prove his innocence.

This takes us to the Time War, or to be more precise, the fallout from it, and it’s handled extremely well. There’s a lot for continuity for fans to sink their teeth into here. Fleeting glimpses of the War Doctor, sneaky cameos from other familiar faces, new Sontaran threats and, at one point, a truly wonderful visual realization of the Time Lock bestowed upon the Great War.

But fear not, those who worry when it comes to the handling of continuity in Doctor Who, these nods and asides to the past are handled pitch perfectly and serve the story well. There’s no overbearing here; all mentions of the past are used gracefully and for a reason.

And reason there is. The Then and the Now is a mystery thriller making use of all of Doctor Who’s best qualities when it comes to storytelling. The intrigue held by the Doctor’s still mysterious as a blood ridden soldier is superb. The mystery regarding the Squire, a companion he cannot remember travelling with, is tantalizing. The redemption of Abslom Daak and the effect the Time War had on him helps to create a more three dimensional version of the character than ever encountered. And the locations… just you wait until you read it!
Posted by John "Zanziber" Rogers at 6:00 AM
Email ThisBlogThis!Share to TwitterShare to FacebookShare to Pinterest
Labels: Reviews