Doctor Who: The Eighth Doctor Vol 1: A Matter of Life and Death

Title: Doctor Who: The Eighth Doctor Vol 1: A Matter of Life and Death 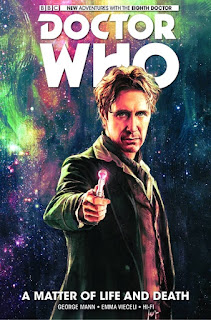 The Eighth Doctor will be, for all but devoted Whovians, a blank slate, because he was initially featured in just one film, a failed attempt to relaunch the Doctor Who series in the 1990s.  Devoted fans may have heard the many audio dramas featuring Eighth Doctor Paul Gann, or read some of the novels, but most American fans will not.  Thus, his personality and quirks are not already built into the consciousness of American comics readers.

The problem is handled fairly well in this collection, a miniseries revolving around a mystery.  The Doctor returns to an old home and finds an artist living there, one whose paintings mysteriously come to life.  Over the course of several stories, not only is the mystery solved, but several apparent digressions finally come together into a single story.

Some fans won't be as interested in this unfamiliar incarnation of The Doctor, but the ones who stick around will be in for a good adventure.  The artwork of Emma Vieceli is very good, showing itself best when portraying the nearly real and the nearly human on the various worlds of the story.

The complexity of the tale aims this story at teens and adults, but it is good enough to be attractive to Doctor Who fans willing to try something different.  It would be a poor jumping-on point for readers unfamiliar with the show or the comics.
Posted by John "Zanziber" Rogers at 6:00 AM
Email ThisBlogThis!Share to TwitterShare to FacebookShare to Pinterest
Labels: Reviews