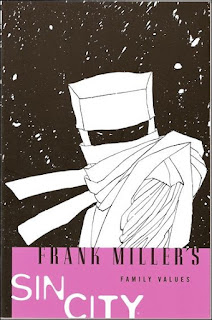 Family Values, the third Sin City tale with Dwight as its protagonist, is at heart a very simple story, yet Frank Miller deftly wraps it in questions. When last seen in The Big Fat Kill Dwight was attempting to prevent a gang war in the Old Town that would have devastating consequences for the prostitutes working there, several of whom he considered friends. He’s now helping them out once more, except while that’s revealed early, the reasons it’s required are only clarified at the conclusion.

It pits Dwight against the upper echelons of the crime syndicates overseeing their territories, yet in an inventive fashion, overturning the theme of the series to date, as he’s always portrayed in control. This incorporates a very clever sequence reversing the usual tension. Dwight has been abducted by a group of threatening thugs who consider themselves to have the upper hand, yet are puzzled by his confidence. This is because it’s already been established that pint-sized assassin Miho is observing from the rooftops.

Miho has similarities to Elektra, as introduced in Miller’s Daredevil, but Miller’s now a far better artist, and there’s a balletic quality to the way in which she swoops and slices with her swords, aided by the visual effect of using roller-blades. That she’s depicted almost entirely in white against a strong black background supplies an almost ethereal quality. This is fantasy material, diverted into other areas of fantasy by gratuitous partial nudity. In a snowstorm.

Another controversial element is the use of racial insults by one of the thugs. Miller gets a free pass on this one. He’s established his stories as set in a form of recognizable reality even if the location is fictional and the action exaggerated. As distressing as it might be, there are people with those views unconcerned about expressing them. Substituting dialogue that might be perceived as more politically correct (as if that could ever apply to Sin City) would diminish the story. And let’s just say he won’t be talking like that again.

This is one of the shortest Sin City sequences, rendered an even more rapid read via several wordless action sequences, all very effective. Yet it’s also the best to date, the background questions providing the tension, the revelations scattered through the book, and an excellent final scene packing a hefty emotional punch.
Posted by John "Zanziber" Rogers at 6:00 AM
Email ThisBlogThis!Share to TwitterShare to FacebookShare to Pinterest
Labels: Reviews