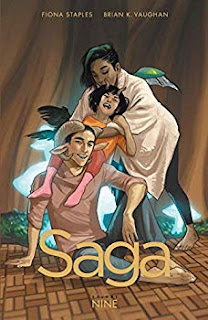 This is a space opera that tackles the most difficult and relevant topics of our own society, doesn’t hesitate to shock readers, flip the script, and most frightening of all, doesn’t hold back from killing off major characters that we are deeply invested in. It’s a cruel message, that even the best people trying to just live their lives and maintain their ideals can be snuffed out by those with less scruples, and that those that have used violence in the past can rarely escape the consequences, even after having turned to a peaceful path. This volume will leave you stunned, gutted, and struggling to recover. Not only that, but writer Brian K. Vaughan and artist Fiona Staples have said they will be taking an extended hiatus after this volume. It may be a good time to re-read the entire series and consider the first nine volumes as a major story arc that comes to a stunning ending here.

In Vol 9, Marko & Alana, their daughter Hazel, Prince Robot, his son Squire, Petrichor, Ghus, Upsher & Doff, The Will, and Ianthe continue their tense cat & mouse chase. While the “good guys” are taking a breather, Upsher & Doff pitch the idea of sharing Marko & Alana’s story to their tabloid in exchange for a big payout that will let them (possibly) escape from all their pursuers and enemies and just be a “normal” family, one not under the constant threat of death from rival galactic empires that both have an interest in extinguishing them. At the same time, Prince Robot has his own plans on how to achieve happiness for himself, Squire, and Petrichor. This extremely unlikely trio makes for a fascinating family unit, and the whole series is so good at mixing up very different characters and forcing them to face brutally-difficult decisions in the midst of harrowing circumstances. How Vaughan manages to keep the banter clever, humorous, and yet completely honest is an amazing accomplishment. There are no false notes, just a continuously shifting tone as we go from quiet moments of brief happiness to sudden, wrenching, and violent deaths. It’s quite an emotional roller-coaster, so be prepared to be thrown for six and put through the wringer – it’s hard to imagine any fan of the series getting through this volume unscathed, and I was once again so impressed by how Vaughan and Staples use the story panels to create unbearable tension. I use Comixology and have it set so you read each panel without seeing the next, so there were moments in the story when I just didn’t want to move to the next panel, knowing something awful was waiting, but being unable to stop myself. It’s a perfect use of the medium, and the artwork is clean, expressive, and gorgeous as always.
Posted by John "Zanziber" Rogers at 6:00 AM
Email ThisBlogThis!Share to TwitterShare to FacebookShare to Pinterest
Labels: Reviews