Conan: The Frost-Giant's Daughter and Other Stories

Title: Conan: The Frost-Giant's Daughter and Other Stories 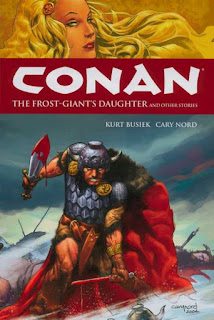 Most readers of my generation first learned of Conan and Robert E. Howard from the popular 70s Marvel comic book Conan the Barbarian and its companion magazine The Savage Sword of Conan. Initially written by Roy Thomas with elaborate art by Barry Windsor-Smith (and later John Buscema), the series ran until the mid-90s, when Marvel dropped the property due to lagging sales.

With Del Rey's best-selling, definitive reprint volumes of Howard's works (the fourth is due this summer), persistent rumors of a new film, and the 2006 centenary celebration of Howard's birth, Dark Horse Comics smartly acquired the comic book rights to Conan. Dark Horse has previously enjoyed successful runs with former Marvel hit licensed properties Star Wars and Godzilla. In the late 80s they began their long string of lucrative franchised properties with Aliens followed by Predator, Planet of the Apes, Betty Page, Tarzan, and others. Conan and Dark Horse are a natural fit.

Conan: The Frost Giant's Daughter and Other Stories collects the first seven plus issues of the comic book (issues zero-six and part of seven). At first glance, "The Frost Giant's Daughter" is an unusual piece to adapt. While potentially visually exciting, the story is one of Howard's weaker (and earliest) Conan tales. Unlike most of Howard's other Conan stories, it is basically just a fight scene containing little substance or plot. By using elements found in Howard's essay on the world of Conan ("Nemedian Chronicles" aka "The Hyborian Age"), Kurt Busiek expands the scope of the original to place the events in the context of Conan's life. Busiek develops Howard's version to incorporate other elements of the Conan mythos.

Contrary to popular misinterpretation (thanks primarily to the Marvel comic books and two feature films), Conan, as presented by Howard, is much more than a fighter. He is a thinker, a tactician, a lover, and a loyal friend. Conan is a barbarian, a thief, a mercenary, and ultimately, a king. The tales are full of political intrigue, romance, swordplay, magic, mythology, and more. Like all of Howard's work, Conan was a vividly imaginative interpretation of a young man's West Texas world.

In the graphic novel, a young Conan has journeyed north in search of the legendary kingdom of Hyborea with its riches and immortals. While saving a young woman's life, he gets embroiled in a confrontation between the warring peoples Aesir and Vanir. Through a series of fights and political machinations, events eventually lead to the frost giant's daughter and eventually Hyborea.

Busiek's masterful manipulation of Howard's playground is supported and supplemented by the artistic talents of Gary Nord, Thomas Yeates, and Dave Stewart. Robert E. Howard was a master of action, who wrote some of the finest and most influential fight scenes ever produced. Reminiscent of Frank Frazetta, the art manages to translate the intensity and flow of the source material. Nord's interpretation of the frost giants is original and inspired.

Unlike most previous attempts, the handsome Dark Horse package is a welcome addition to the Conan mythos. With Busiek, Nord, Yeates, and Stewart at the helm, I'll be back for more.
Posted by John "Zanziber" Rogers at 6:00 AM
Email ThisBlogThis!Share to TwitterShare to FacebookShare to Pinterest
Labels: Reviews