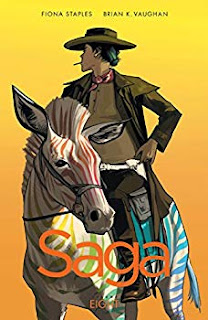 Saga is my favorite comic series, because it is always pushing the envelope in terms of content, themes, gorgeously assured and sometimes shocking artwork, and characters so charming, honest and flawed that you can’t help but cheer for them. If you like intelligent, snarky, sometimes profane space opera with a vast cast of star-crossed lovers, bounty-hunters, humanoid robots, tabloid reporters, terrifying monsters, and oddball creatures all caught up in a galactic war between the technology-based Wings and magic-wielding Horns of Wreath and Landfall, this series is guaranteed to captivate.

In Vol 8, Marko, Alana, Hazel, Prince Robot, and Petrichor find themselves on a remote Wild West planet. The traumatic events on planet Phang are still lingering, and they are in desperate need of an emergency medical procedure (any more details would be a spoiler). Once again writer Vaughan is unafraid to tackle a sensitive subject with the opening panel. And while I thought this time the story sometimes felt like it was purely a vehicle for political debate and hurt the story’s momentum, I applaud his willingness to put his characters in contentious moral situations. It’s a trademark of the entire series, love it or hate it.

While Petrichor encounters some Wild West outlaws, Alana, Marko, and Hazel hitch a ride on a train and meet up a very unexpected new character that quickly bonds with Hazel. In fact, Alana has discovered some surprising new powers that may be connected to this. Finally Alana and Marko reach their destination and the doctor they’ve been seeking. The dialogue sounds like something from a TV talk show debate, but then that’s what Vaughan wants to talk about, so that’s what we get. I thought this part of Vol 8 dragged, as the characters debate the merits of their actions. Likewise, Petrichor and Prince Robot are another odd partnership and have many arguments over gender, war, and politics.

I liked the story of Hazel and her new friend Kurti better. There were a number of poignant moments as they innocently discuss the world of adults, and this section will appeal to parents, siblings, and those aspiring to become one. Again, this part is very well-written and didn’t feel as forced as their earlier parts.

In the next chapter, we once again see what The Will has been up to, and he’s not in a good place. Seems that one of the many individuals he’s casually killed during his illustrious freelance bounty hunter career had a loved one who has tracked him down to exact revenge. This person has decided to really torture him by going through his old memories. We get to see some scenes from The Will’s childhood and early days as a bounty hunter with The Stalk. Artist Fiona Staples treats us to the ultra-violent action that the series generally features. I’m sometimes unsure if Vaughan & Staples show gruesome violence for the vicarious thrills, or as a technique to highlight that killing is not clean and anonymous like storm-troopers in Star Wars. Considering that his old sins are now catching up with The Will, I would hazard a guess its’ the latter. Eventually, his tormentor unearths a very valuable secret from his memories, though it’s no secret to readers.

In the final chapter, we rejoin Upsher, the gay tabloid journalist, Ghus the little prairie-dog warrior with a sense of justice, and the innocent young son of Prince Robot, Squire. They have an adventure in the forest, seeking the fearsome Dread Naught, and Ghus and the young robot have some interesting discussions about what situations justify fighting and killing to protect yourself.  Vol 8 ends on an upbeat note, quite the opposite of the dark final panels of Vol 7.

Now that the series has reached 48 episodes and eight volumes, it has settled down to a more thoughtful pace, and while I think it does lack the intensity of the first four volumes and over-indulges in overt political themes that didn’t really carry the story forward much, I think Vaughan feels that he’s earned the loyalty of readers enough to be able to explore such themes with less propulsive action and more discourse. Again, I really appreciate that SAGA is not about escapism, its about our messy world, war, injustice, intolerance, innocence and cruelty, and most importantly the decisions we must make each day to get to the next day. That’s what keeps the series relevant and fresh – it’s real and funny and heartbreaking, often in rapid succession. Give it a try if you haven’t yet.
Posted by John "Zanziber" Rogers at 6:00 AM
Email ThisBlogThis!Share to TwitterShare to FacebookShare to Pinterest
Labels: Reviews