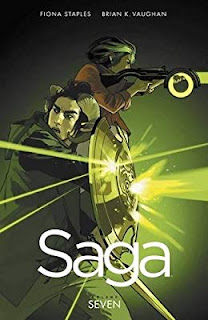 In Saga Vol 7, the story resumes as Marko and Alana are finally back together and Hazel is growing up quickly. Being from opposite sides of the conflict, they are an affront to both and their mixed child is considered an abomination that could undermine the biases that keep the two sides hating each other. They remain on the run from both sides, allied with a former enemy and a former prisoner who harbors a secret. When their ship runs low on fuel, they find they need to make an emergency stop on a comet called Phang. Much of the action takes place on this giant rock, “an exotic land of boundless diversity, home to thousands of different tribes, sects, and species…almost all of whom despited each other.” Phang has long been a battleground mainly because of its rich fuel resources, and much of its local populace lives a precarious existence while civil conflict continues. The parallels to certain geopolitical regions in the real world are painfully obvious, down to the stream of refugees produced by the fighting. Saga has never held back from making strong statements about war, racial prejudice, sexual orientations, and uses its violent content in part to push a strong anti-war sentiment, a recurring theme of the series.

As always, the story is carried along with multiple narrative threads, including that of Alana, Marko, Prince Robot, Petrichor, and Izabel on Phang, where they encounter a group of refugees who look like harmless prairie dogs. They are surprisingly innocent but devoutly religious, living in the ruins, and the overlays with images of adults and children living in the rubble of Syria, Afghanistan, Iraq are certainly deliberate. After all, most civilians just want to live a decent life and avoid getting killed by either side, right? So why do they always end up caught in the crossfire. Our protagonists end up forming familial bonds with them, and Hazel forms a particularly close friendship with a young prairie dog male named Kurti. They’re just two kids growing up in a hostile and cruel world, but like all children they retain an innocent and accepting view of the world around them.

A separate storyline follows bounty hunter Gwendolyn, a little girl named Sophie rescued from slavery, Lying Cat, and even The Will makes a cameo. They are seeking to make an alliance between elements of both sides, but this storyline is fairly underdeveloped and feels more like a placeholder for events likely to happen in future volumes.

Meanwhile, Marko and the gang have to deal with a ruthless new bounty-hunter named The March, who seems to getting more work since The Will has been on sick leave. And the comet is quickly approaching a very lethal celestial object that is certain to lead to doom unless they find a means of escape…

I flew through the chapters of Vol 7 just as quickly as previous volumes, but as I said in my reviews for Saga Vols 5 & 6, the pace of the story has slowed a bit and the new characters are not quite as fresh and the twists and shocks that were so effective in Vols 1-4 have also lost a bit of their impact. Once again, the series remains very intelligent and is not content just to provide escapism. Vaughan clearly cares very much about the often harsh cruelties of the real world and has found a way to explore them in a quirky and action-filled space opera format unlike any other, so I will continue to follow the fates of his characters, and will be moved when not all of them survive. The ending of this volume is quite tragic and fades to black in a way only possible in comics.
Posted by John "Zanziber" Rogers at 6:00 AM
Email ThisBlogThis!Share to TwitterShare to FacebookShare to Pinterest
Labels: Reviews