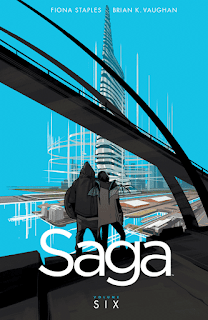 For all the bizarre worlds, colorful characters, and galaxy-traversing adventures that populate the pages of Saga, the driving force of its story has always been rather tame: this is a comic about family. Plain and simple. It doesn’t matter that the family of protagonists in Saga are filled with horned mages and winged warriors. Nor does it matter that the supporting characters are TV-faced royalty and super-human bounty hunters because just about every single character’s driving force is their family, as disjointed as they may seem at times. It’s a very human approach to such a fantastical story. Brian K. Vaughan (who is arguably one of the best writers currently working in the industry) knows how to homogenize a space opera into something that would be relatable to anyone.

Saga Vol. 6, which collects chapters 31 – 36 of Vaughan and Fiona Staples’ ever-expanding science fantasy epic, continues this approach by finally bringing our core family back together while also increasing its ranks (sometimes in very unexpected ways). We pick things up quite some time after the core events of the previous volume. Hazel is now four years old and seems to be pretty well adjusted to living in incarceration on Landfall. She’s going to school and even seems to have decent relationships with some of her detainees. Meanwhile, Alana and Marko are still trying to find the means to break Hazel out and reunite their family.

Honestly, this is an arc I felt could have been resolved either a lot quicker or with some more dire consequences. Saga has never had a problem with killing ancillary characters, but there is very little doubt as to who is actually on the titles “safe list.” Most serialized stories suffers from this (we all knew Jack was going to make it to the last episode of Lost, despite original plans for the character). I don’t fault Vaughn and Staples for this. I doubt there is a reader sick enough to actually want to see Hazel or Marko or Prince Robot IV die a horrible death, but knowing that these characters aren’t going anywhere anytime soon can knock the wind right out of the drama’s sails.

This might be a superficial complaint, but it does make me wonder if Saga will reclaim its break-neck pace from earlier volumes. Perhaps this is the mid-series sag some of Vaughan’s previous ongoing titles have suffered (I’m looking at you, Ex Machina & Y: The Last Man). There are times where this book seems to plod along, which is something it has never done in the past. Ironically, we don’t get to spend enough time with any new character introduced in this Saga Vol. 6. The pacing is just off.

Now, don’t get me wrong, I actually enjoyed Saga Vol. 6, but it didn’t make want to thank the comic gods and pray for more than six issues a year like the trades before it. There is a lot that works really well: Upsher and Doff coming across as drug-addled and overweight; The Will was both hilarious and nerve-racking; Every time Ghüs graced a panel, a smile crept across my face; and a lot of the prison stuff was great. But even with all the things that worked well, I had a feeling that the creators were either treading water or they regretted splitting the band up so much, they had to reform it without giving a damn about collateral damage.

I will grant Vaughan and Staples their individual consistencies, however. Staples’ art is as great as ever. Every choice she makes with character designs and environments ebbs and flows with the story. It never makes you stop and realize how bizarre everything is; this is just the world she’s drawn, accept it. Her sheer bravery in her art should also be noted. There isn’t a damn thing this woman is afraid to drawn. She doesn’t pull any punches. Whether it’s a scene of horrific violence, or a sexual act, or a scene of pure emotional turmoil, Fiona Staples will convey them with a palatable frankness that many artists don’t have the huevos to do. Staples doesn’t get the credit she deserves for this.

Vaughan is a master of the surprise splash panel, and crafts great dialogue. There is a reason why this man is considered one of the contemporary greats. Despite some of the plot beats not hitting as hard as I’d like them to, there wasn’t a wasted word on the page. Vaughan’s decision to introduce new characters felt justified and it didn’t clutter the book, even if we never really got a chance to become familiar with them.
Posted by John "Zanziber" Rogers at 6:00 AM
Email ThisBlogThis!Share to TwitterShare to FacebookShare to Pinterest
Labels: Reviews