Rick and Morty vs. Dungeons & Dragons 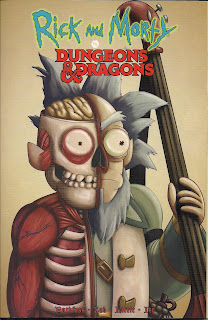 One of the biggest crossover events in comic books last year was seeing Rick and Morty take on the world of Dungeons & Dragons in a four-issue arc. Penned by Jim Zub and Patrick Rothfuss with art by Troy Little and colors by Leonardo Ito, it was the pop-culture peanut butter and chocolate combo you never knew you needed until IDW and Oni Press gave it to you. After the initial release and all of the various different cover versions came out, it was decided that a couple of different hardcover editions would be released to different sources and retailers. One of those versions is the red cover, which was only made available to GameStop. But the thing that makes this edition so special is that it comes with a playable D&D adventure. With a second series on the way and WotC releasing their own Rick and Morty adventure sometime before year’s end, it seems only fitting to crack open the pages of this book and give it all a proper review.

So let’s start with the main portion of this book, which is the four-issue run of the original Rick and Morty vs. Dungeons & Dragons comic. If you thought R&M was meta before you picked up this comic, you have no idea how meta the meta can get. This is fourth-wall breaking through multiple dimensions as the story examines what happens when Morty sees that D&D is being played by students at his school and he thinks maybe jumping in on the adventure might get him laid. When Rick gets wind of the sudden interest, instead of calling it lame, he is overjoyed that his grandson has taken interest in something he once played and decides to show him the ropes as only Rick Sanchez can. Of course, nothing goes as planned and everything about their adventure through the realms both virtual and real become a twisted look at the various ways the game is played and the personalities who come to roll a few dice.

There are parts of this book that are intrinsic to the fabric of D&D as a game and a culture. It shows off some of the best parts of what the game can be to people through the eyes of writers who are super passionate about it and the impact it’s had on their lives. Oh, and did we mention there’s a lot of emotional baggage here, too? Rothfuss and Zub manage to run the gambit through pretty much every geeky personality that plays the game, and much like the fellow characters you play at the table with, not all are complementary to what’s going on. In fact, there’s some heavy shades of darkness in these pages that took me back throughout the years to games I had played, people I played with, and scenarios I had experienced for better and worse. Plus, it’s nice seeing people like the ghost of Gary Gygax appear along with people like Satine Phoenix, Matthew Mercer, and Mazz. The comic is definitely one you need to read.

The book also comes with a few additions that fans of both series will absolutely love. First, the book has these specific character sheets for all of the classes the Smith family play as, along with a blank character sheet for you to make your own character with. These are fun additions that were also used as alternate covers and shows off a lot of the humor thrown into making each of them. What’s more, you can actually use all of these characters because (aside from some joke items here and there), all of their stats appear to be accurate to Fifth Edition of Dungeons & Dragons. (Or at least as best we could tell comparing stats and bonuses in the Player’s Handbook.) Keep that in mind for what’s to come.

Speaking of alternate covers, every single one of them that were created for the series is here in their stunning glory for you to enjoy. Presented to you as fine works of art with the people responsible for their creation tagged at the bottom. Honestly, some of these should be prints for sale on IDW and Oni Press’ websites because the detail that went into a few of them are just amazing. Quality work from people who clearly have an appreciation for both franchises and their work should be featured much more prominently.

Finally, the last section of the book and the main reason we wanted to check it out for a review: the adventure! There is a full Rick and Morty themed adventure in the back of the book called The Temple of Glorb, which you can either use your own characters for or use the ones for the Smith family which we talked about earlier. (It’s fun either way, but it’s way too easy with the R&M people, so go with your own creations.) This one was put together by Adam Lee and is designed for 4-6 Level 1 characters. It is told and put together like a regular adventure you would find in D&D, complete with obstacles, a couple of maps, encounters, options for the DM, and enough references to make it feel like you’re also playing an episode of the show. I got to run through this with a couple of different groups who both knew the material and never watched the show, and everyone got some enjoyment out of it. It’s a short adventure, but you know what? It’s a good introduction place for Rick and Morty fans who are now interested in the game, and that makes it a winner to me.
credit//IDW Comics

Overall, this is basically the best version of the hardcover editions of Rick and Morty vs. Dungeons & Dragons that you’ll want to get. And not just for the amazing cover drawn by Mike Vasquez on the front. This is an all-in-one book for anyone who enjoyed this run and wanted more out of it than just four issues. Sure, we’re getting more soon, but this is a great way to tide yourself over until it comes out. And it’s a hardcover, which by trade standards is a pretty awesome way to own a complete set for a special event. This is the complete package for this story in every planeshifting way possible.