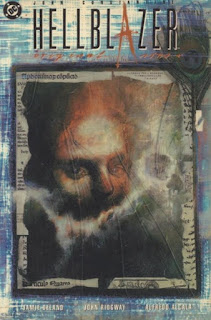 In the first story, a childhood friend of Constantine, who dabbles in magic and illegal drugs, accidentally lets loose a demon, Mnemoth, who infects humans with an insatiable hunger. And it’s spreading, growing stronger. To stop it, Constantine will have to travel from Liverpool to Africa, and then to America. He’ll have to enlist the help of a Voodoo Doctor, and avoid the ghosts of his past who literally haunt him to this day. In the second story, Constantine finds himself caught up in the unusual deaths of yuppies in Spitalfields near the East End and Liverpool Street station, a place where he never thought to find yuppies living, let alone dying. It doesn’t take long for him to run afoul of a horde of demons living in the area.

The third story finds Constantine searching for his lost niece, Gemma, with the help of his new friend, Zed; a woman he meets when he turns a street corner, who appears to have some skill with magic, and whom Constantine desperately wants to sleep with. Here, he meets God’s Warriors and the Damnation Army, two opposing forces who will resurface later. The fourth story sees Constantine drawn to a small town in Iowa who lost many of its young men in Vietnam, but, through a strange twist and more than a little magic, they are about to return home for one, tragic night. The fifth story, Extreme Prejudice, touches on a lot of hot topics including racism, homophobia, AIDS and more, and sets Constantine against local street thugs and a demon. In the sixth story, Constantine learns who Zed really is, and what the Damnation Army and God’s Warriors both want with her.

Last, you have a story balance from the pages of Swamp Thing. Constantine has a plan, one he hopes the Swamp Thing will accept and support. The balance of everything is at stake should he fail.

If you haven’t picked up on it yet, the stories in Hellblazer have an edge to them. Much more so than what you would see in the pages of a regular DC book—hence the Vertigo imprint. The art is dark and moody, setting the tone for the stories, which have just enough horror, just enough of a twist, to make you wonder. John Constantine drinks to excess, he smokes all the time, he sleeps around, he makes bad choices as often as he makes good ones. He is a complicated character. Not everyone will like him for the choices he makes, right or wrong. His world is bloody and violent.