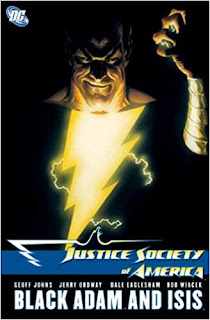 The Justice Society of America is in tatters, and the future of the team and its members are in question.  When Black Adam makes a power grab at the Rock of Eternity, the JSA will have to hold together in the hopes of stopping him and the “Black Adam Family”.  Plus, a ghost from the past forces members of the JSA to experience the release of the atomic bomb in Hiroshima…and only the Spectre can save them!

Written by Geoff Johns, Jerry Ordway, and Matthew Sturges, Justice Society of America:  Black Adam and Isis is a DC Comics superhero collection.  Following the events of Justice Society of America:  Thy Kingdom Come—Book 3, the collection features art by Jerry Ordway, Dale Eaglesham, and Fernando Pasarin.  The issues in the collection were also collected as part of the JSA Omnibus—Volume 3.

I will say that Justice Society of America has always been a great soap opera comic book and this collection continues it.  The series is largely about families and the rifts and arguments between the family members.  Examples include Hawkman taking flight (pun intended) from the team and Al and Courtney’s requited love.  It is largely emotionally driven stories and characters which gives them more depth than some other comic book teams.

The two stories in this volume aren’t the most satisfying.  While I certainly like aspects of the “Black Adam and Isis” issues, I feel that the middle part of the series and the conclusion is too rushed.  The action suddenly jumps to Kahndaq, the Wizard is restored, Black Adam & Isis are stopped, and Billy and Mary are left in the lurch…it seems like a lot happened that wasn’t explained or expanded upon.

The second storyline likewise is rather confusing and needs clarification.  The Justice Society is pulled back in time (maybe) and faces the ghosts of war.  The story feels like it should have been a three issue storyline and developed more.  The villain could have been more rounded, and I wish that the Crispus Allen Spectre was more explored.

Justice Society of America isn’t always the best title, but I enjoy the characters and the story of the JSA so it gets more of a pass than other DC titles.  The issues of the collection still have some of the great Alex Ross cover art which makes them worth reading alone.