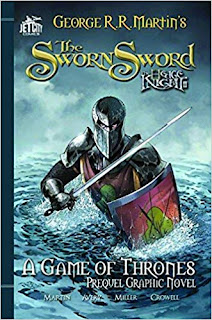 This is a spoiler-free review since the twists are so fun to discover along the way, just like in A Song of Ice & Fire, I wouldn’t want to ruin it for anyone. It picks up basically two years after the events of “The Hedge Knight” with Dunk and Egg now serving under Ser Eustace Osgrey. There are basically two storylines we’re following here: the present-day conflict between House Osgrey and neighboring House Webber as well as the First Blackfyre Rebellion, told in flashbacks.

The story is set roughly a hundred years before the events of A Song of Ice & Fire, so the Targaryens are still ruling Westeros. Just because of that fact, I’m already sold on this series since they’re my favorite House. There are tons of references to various Targaryens that can be traced (thanks to Google and Wikipedia) all the way to Daenerys. I particularly enjoyed the story of the Blackfyre Rebellion, which was mentioned in A Storm of Swords but we’re given more details in this book. If you don’t remember what the rebellion was all about, essentially Aegon IV legitimizes his bastards so when he dies, one of his bastards Daemon Blackfyre tries to seize the Iron Throne from the legitimate son, Daeron. The art is amazing and definitely adds to the story, leaving me wanting to see the Blackfyre Rebellion flashbacks on the show or as a mini-series.

The other plotline with Osgrey and Webber was interesting but nowhere near as exciting as the rebellion. I did like the character of Lady Rohanne Webber or the Red Widow. She reminded me of a mix between Dany and Ygritte, and not just because she’s a widow and has red hair. It’s her fiery spirit and general badassness that made me think of the comparison.

While I liked “The Hedge Knight” more than “The Sworn Sword”, the second prequel graphic novel is an enjoyable must-read, The third novella has been adapted into graphic novel form as "The Mystery Knight". I’m looking forward to it since I think Dunk and Egg will encounter my second favorite House in Westeros, the Starks.