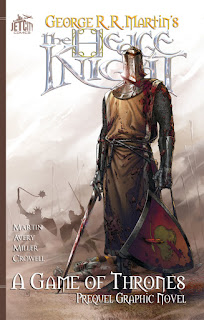 The Hedge Knight is set in Westeros, 100 years prior to A Game of Thrones, the first book in the A Song of Ice and Fire series. The story starts out with Dunk the Squire of Ser Arlan of Pennytree, a Hedge Knight, burying his master. Ser Arlan died of what I’m pretty sure was essentially pneumonia whilst the pair had been between destinations. Ser Arlan had no heir nor any family at all, besides Dunk. These facts, combined with his strength, prowess, and training, convince Dunk to take Ser Arlan’s place. And so Ser Duncan the Tall, the Hedge Knight, is born. The Hedge Knight is half a story of Dunk and his rise to (true) Knighthood and half a story of his friendship with Egg. Egg is a young orphan boy that Dunk meets on his way to his first tournament. They don’t hit it off from the start. Egg wants to be Dunk’s squire, but is rejected by him. To be fair, he rejects Egg because he thinks that he’ll be better off without him, but he doesn’t let him in on that. Egg refuses to give up, though, and Dunk has no choice but to give him a shot at squiring. Together they will take on the Ashford Tournament and their friendship will grow along the way.

I really liked everything about The Hedge Knight. I’ll start with the story. It is reminiscent of the Heath Ledger movie, A Knight’s Tale. Imagine that movie set in the world of A Song of Ice and Fire and you’ll start to get a good idea on what this graphic novel is like, but it’s so much more than that. One thing that I particularly liked about the story is the setting. As I mentioned, The Hedge Knight is set 100 years before the first book in the series, which is cool for multiple reasons. The first and most obvious is that it lets us explore more of the lore and the world that George R.R. Martin created and from new aspects and perspectives. These aren’t the characters that you love and hate from the regular series, but the world will feel very familiar to you. All of the big Houses are there. This is a time when House Targaryen ruled all in Westeros, so they have a heavy presence, as you might imagine. The only House that I didn’t see was House Stark, but who knows what they were up to at that time. Familiar places will be referenced, but not seen. The Hedge Knight takes place entirely in Ashford and it’s surrounding areas. Fans will also recognize many names from the books lore, but this graphic novel brings them to life. There’s even a singing of “The Bear and The Maiden Fair“, which I thought was a fun touch. The other reason that I liked the setting was that it allows us to see this universe in a time when things weren’t as heavy as they are in the books. Of course, there is always conflict, turmoil, etc. No time is ever completely peaceful and quiet, but at least for this story, we get to see a (mostly) lighter tone brought to the series for once, which is a nice change of pace.

As far as characters go, there were some great major and minor characters in The Hedge Knight. Dunk is a likable guy. He’s strong, courageous, determined, humble, righteous, and a dreamer. Good qualities for a Knight and a classic protagonist. Dunk does have his flaws and he’s still got a lot to learn, but he’s the type of person who will improve himself as time goes on. His sidekick, Egg, is a smart boy and you get the feeling that there’s more to him than meets the eye. Egg is persistent and has a servant’s heart, though, and you can’t help but like him. Together, Dunk and Egg make a really fun team, and I can’t wait to read more of their tales. With this graphic novel taking place mostly during a tournament, there are people from all over the realm in attendance, which makes for a very diverse cast of minor characters. As I already mentioned the Targaryens ruled Westeros at this time, so quite a few of the minor characters are made up of their people, such as Prince Baelar, who was one of my favorites. A couple of other standout characters were Raymun Fossoway (Steffon Fossoway’s squire and Dunk’s new friend) and Tanselle the Puppeteer (Dunk’s Dornish crush).

Overall, The Hedge Knight delivers a very fun and epic story filled with interesting characters, some of which you will come to love and to hate, just like in the book series.

As I mentioned above, The Hedge Knight, has a lighter tone than the A Song of Ice and Fire books, and so I think it was a good move on their part to apply a lighter tone to the art as well. They did a good job of it too. I had a feeling that it was going to be a lighter, more fun, take on the series from the art before the story. I thought they did good job at making it look just the right amount of realistic and not cartoony. Lighter tone/style works, but cartoony Game of Thrones? I don’t think so. I’m not sure what more I can say about The Hedge Knight‘s art, but I really did like it’s style.

The Hedge Knight is an exceptional graphic novel and a must read for all fans of the A Song of Ice and Fire series. It definitely measures up those books and fits right into the series. I loved it. Fans of the TV show will also thoroughly enjoy The Hedge Knight. In fact, I think they’ll enjoy it as much as fans of the books. The Hedge Knight offers a good opportunity to read a story in the Game of Thrones mythology, with a much lighter investment of your time and/or patience. I think fans of fantasy comic books can also enjoy this graphic novel, but fans of the books and the show will definitely get more out of it. As I said above, I can’t wait to check out the next chapter in the Tales of Dunk and Egg!