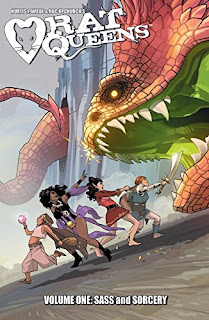 Meet the Rat Queens, a group of foul-mouthed badasses who brawl as hard as they party, and they do both with style. There’s Hannah, the spell-casting hot head; Violet, the beardless warrior dwarf; Dee, a divine sorceress who left the squid-worshipping cult that raised her; and Betty, the cute-as-a-button thief with a penchant for candy and magic mushrooms. Collecting the first five issues of the acclaimed new series, trade paperback Sass and Sorcery is a solid introduction to the group’s raunchy, sword-swinging escapades, and with a comic this fun to read, the larger dose is welcome.

While there’s no shortage of action, the personalities of the Queens drive the book. Writer Kurtis J. Wiebe has crafted a cast that’s rowdy, sarcastic and intensely loyal, like a magic-infused roller derby squad bashing its way through Middle-earth. It doesn’t matter if they’re fighting trolls, stabbing mercenaries or just angering the townsfolk, watching them interact with the world is where the fun is. That’s not to say that this volume is light on plot: someone has hired assassins to kill the Rat Queens, and they encounter some precarious situations as they try to uncover the culprit.

As engrossing as the plot is, Roc Upchurch’s art brings all of these personalities to life. His storytelling is dynamic, as characters often bound beyond panel borders, but he truly excels at facial expressions. He wields such minor mannerisms — a snarled lip, a dubious squint, a mischievous smirk — to massive effect. Whether it’s the crinkled eyebrows of a hangover, or Betty’s innocent smile spattered with troll blood, there’s so much expression in the pages you can almost forget that you’re looking at static drawings and word balloons.

Sass and Sorcery bounces seamlessly from gore to humor, sprawling action to small personal moments — sometimes simultaneously, and that’s what makes the whole thing work so well. In the end, the characters are built so strongly that you don’t just want to watch them raise hell — you want to grab a battle axe and join in.