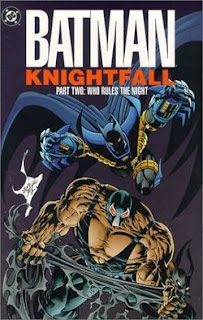 The second part of Knightfall collects the issues directly following the breaking of Batman and lead into Jean Paul Valley's transformation into a meaner, deadlier Bat. Think of this as Azrael: Year One, with Batman's successor, the former Azrael, taking on the mantle of the Bat.

They say power corrupts and this book proves it. Given the role of Batman, Jean-Paul quickly descends into vigilante madness. Using "The System," which was implanted into his mind by the Order of Saint Dumas, Jean-Paul can perform incredible physical feats and perform complex engineering tasks -- like designing a bat-suit that's more like battle armor. Bruce Wayne worked all his life to become Batman. Jean-Paul got brain-washed to earn his skills. Obviously this is a Batman that just won't do.

As Jean-Paul gets more aggressive, he and Robin split and we're all left hating the new Batman. The purpose, it seems, is to make us clamor and hope for a replacement that isn't an asshole. That's really not what I'd call top-notch writing. As the story plays out, jean-Paul is essentially building himself up through experience so he can face Bane and take him down. As he improves, so does the suit as "improvements" turn it into an ugly piece of work.

On the one hand, we get to see what life might be like with a different Batman, but it's all too obviously manipulated. We never really get a chance to see Jean-Paul as anything more than a jerk with a somewhat questionable background who has no business being Batman.

Had DC the courage, they would have let Dick Grayson come in. Imagine the conflict when Grayson (who would certainly do things a little different than Batman) holds his own as the Dark Knight only to have Wayne healthy and ready to return to the role. How can Dick not give up the suit, but then, what if the city is better for having him. What if Tim Drake prefers Grayson? Now instead of a somewhat forced conflict, you have some real drama that builds on the history of Batman.
Posted by John "Zanziber" Rogers at 6:00 AM
Email ThisBlogThis!Share to TwitterShare to FacebookShare to Pinterest
Labels: Reviews