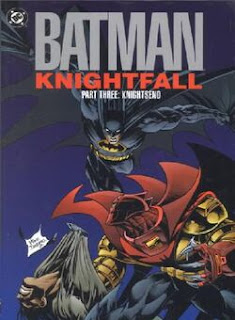 The final volume in the three part Knightfall collected trade paperback series, following the excellent part one and the average part two, finds the original Batman, Bruce Wayne, prepare to take down his hand-selected successor John Paul Valley. Almost immediately after receiving the mantle of the bat from the injured Bruce Wayne, Valley (henceforth referred to as his other alter-ego Azrael, for clarity's sake) exhibited signs of extremism in his attempts to fight crime. By the end of book two, he had defeated Bane, but managed to stop just short of killing him, signaling that he might be alright as Batman after all.

Unfortunately, Azrael's conscious didn't stick. In the interim between part two and part three, he killed a criminal, which lead to the death of an innocent. When confronted about his dark turn by Robin, Azrael attacked the Boy Wonder. This leads to Bruce Wayne realizing that he had to defeat Azrael, as Valley's terror campaign on Gotham's underworld was the result of his mistake. There is an 8 issue gap between the two sets, at the interim series featuring Azrael as Batman, Knightquest, did not receive the TPB treatment. Unfortunately, this means that the reader misses out his decent into madness and darkness. Also, the sub-plot from part two involving Wayne and Alfred going to rescue Robin's father, with Catwoman stowing on board, is resolved in the interim and goes unmentioned. However, there's a good chance that those issues weren't that good, since Azrael is nowhere near as compelling a character as Bruce Wayne/Batman, so it's probably for the best that the series skips ahead to the story of him reclaiming his rightful position.

Before Wayne can take on Azrael, he first must regain his fighting edge. To do this, he enters into training with Lady Shiva in some ninja tales. This is the first half of the book, which alternately shows Wayne training and Azrael going nuts looking for the dead killer of his father. And it's kinda dull. Some of the fighting between Wayne and the ninja-types is fun enough, but the first half is definitely nothing special. The highlight of the first half is the interactions between Nightwing and Robin, especially when Dick Grayson returns to the Batcave, learning that you truly can't go home again.

The book picks up the pace once Wayne finishes his training and once again dons the traditional Batman costume (as opposed to the overly-stylised armoured monstrosity that Azrael wears as Batman). The shift is marked by issue twelve of Catwoman, thrown into the series to boost sales of Catwoman no doubt. But, it's a fun read, highlighted by the gorgeous art of Jim Balent. Then it kicks in to a multi-issue battle between the new and old Batmans. It's pretty good action, although for most of the first half of the set, Azrael is so far gone mentally that you have to wonder if he'd really be much of a challenge to the real Batman. I remember thinking that Nightwing could probably take him out. The writers must've also had that thought, because after it looks like a booby-trapped Batmobile kills Batman, Nightwing takes on Azrael one on one to avenge his former mentor.

He gives a good showing, but ultimately is beaten by Azrael for the same reasons Batman had trouble with him, the battle suit is too powerful, and Azrael has no concern for the lives of bystanders (unlike Batman and Nightwing). This leads to the final battle between Batman and Azrael, which brings the Knightfall story full circle. The two face off in the very place where Batman was originally defeated by Bane (which, in turn, lead to Azrael to become the new Batman), Wayne Manor. The battle was a little too talky for my liking, and a little unfulfilling in the way it finished up. But, in the end, the reader is treated to what they deserve: the one and only Batman victorious and ready to once again assume the mantle of the Dark Knight.

Sadly, the series never did reclaim the energy and brilliance of the first part of the series. Largely, I think this is because Jean Paul Valley just isn't that interesting a character. I think DC wanted to shake things up and get some attention by bringing in a new Batman and give him a new costume, and slipped a bit along the way in creating a good character. But, while flawed, it was still a pretty decent story that did an excellent job in showing that Batman is more than just a well-trained vigilante with lots of wonderful toys. Which is important, since I think some of the portrayals of Batman over the years have gone a little too dark. Yes, he is the Dark Knight, but he's not the Dark Avenger. Knight implies an honor code to Batman's dealings, and the series as a whole did a great job in examining it.
Posted by John "Zanziber" Rogers at 6:00 AM
Email ThisBlogThis!Share to TwitterShare to FacebookShare to Pinterest
Labels: Reviews