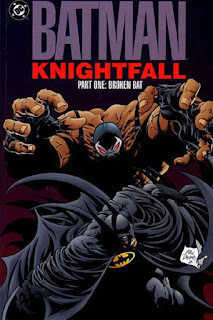 In the 90's, DC comics shocked the industry with two unthinkable events. Superman died and Batman was broken. Interestingly enough, both were defeated by brand new foes. But where Superman was felled by an unstoppable force who simply tore through the DCU, Batman was defeated in a much more convincing and painful manner.

Bane, who in this book is a brilliant strategist and evil bastard, sets loose all of Arkham Asylum, gives them weapons and lets them run wild. While Batman fights against utter chaos, Bane sits and waits, watching his prey. He waits until Batman is completely drained, until he can barely stand, until he no longer wants to stand. Then he strikes. The battle is one-sided. Batman has nothing left, he knows he is dead. But instead of being killed, Bane does one worse -- he breaks Batman's back and leaves him like waste.

Knightfall Part One collects the run of Batman and Detective comics that begin with the Arkham breakout and end with the broken bat. A story such as this certainly has a chance to become an epic, but in retrospect, Knightfall doesn't resonate years later.

There are some great things about Knightfall Part One. Bane's plan is brilliant and executed flawlessly. The Batman's own ego ends up being part of his downfall. Running a gauntlet through Arkham's worst can make for some inspiring reading, but oddly enough, the majority of enemies Batman faces most people have never heard of -- Zsasz. Amydala, Firefly? Sure, a few classic baddies show up, but a lot of screen time is devoted to bit players.

More frustrating than anything is the complete exclusion of Nightwing in any way. Batman plays it tough and says not to call on Dick Grayson, but it's impossible to believe the Grayson, having heard about the massive breakout, never shows up on his own or bothers to even call. No, that's not possible, because it would ruin the story, would destroy Bane's plan. Instead of incorporating Nightwing into the story and into Bane's plans, he's shut out. As a long-time Batman fan, I don't buy it. And when you're going to crack Batman's back, you really do need to cover all bases.

Despite some shortcomings, Knightfall Part One is an enjoyable read. However, you should be warned that this trade doesn't explain why Bane hates Batman nor does it show the events leading into Knightfall. These events are crucial, because when Arkham inmates are sprung, Batman is already weak from some previous incidents.

If you are eager to read some books that are still a big part of Batman continuity, Knightfall Part One is a good choice. And really, if you are any kind of Batman fan you owe it to yourself to see how Batman's will was broken (which is much more interesting than cracking his back). The despair in Batman's face and his crumpled body language before his battle with Bane makes this a rather unique instance in Batman's history -- the one time where he loses it all.
Posted by John "Zanziber" Rogers at 6:00 AM
Email ThisBlogThis!Share to TwitterShare to FacebookShare to Pinterest
Labels: Reviews