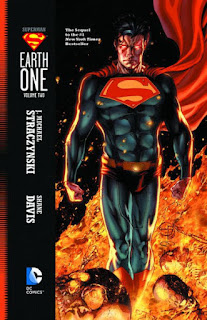 Superman: Earth One Vol. 2 continues where the first volume left off; shedding light on the transition of Clark Kent into Superman.  The first volume re-imagined the creation of Superman in an updated world (as did Man of Steel No. 1 by John Byrne in 1986) and gave readers a look into the "why" he chose to don the symbolic "S" on his chest.  The second volume depicts his battle with Parasite, a serial-killing super-powered human that gains strength as he steals energy from humans, electrics, cars and even Superman himself.

Stracynzski does an excellent job of adding his own touch to the Superman franchise.  He has taken the Perry White character and developed him into a mentor for Clark Kent the journalist, as opposed to sticking to the tough boss we've seen in past comics.  He has also made the Superman story even sexier--enter Lisa Lasalle, Clark's redheaded next-door neighbor who is so hot she might have superpowers of her own.  While Lisa is Clark's love interest for this storyline, Lois Lane is also mentioned in the book--Lois is investigating Clark's past to uncover his secrets.

Shane Davis and Sandra Hope have phenomenally drawn this comic.  The book is edgy and colorful and both Parasite and Superman look tremendous--although, at times, Superman does look almost villainous with those red eyes.

The battle scenes in Earth One Volume 2 may seem short-lived and quick, but their point is made and drawn beautifully.  But, the main focus of the book is to explore Clark Kent's mind and give readers a look into his past and what went into his becoming Superman.  The book does this very well.  Readers are drawn in by Clark's human feelings, which were developed by his life in Smallville.

Stracynzski, Davis and Hope creatively modernized Superman like no other previous attempt has managed. I highly recommend this comic book to anyone who enjoyed "creation of" and "evolution of" superhero storylines in the past, as this one is right up there with the best and well-deserving of your hard-earned money.
Posted by John "Zanziber" Rogers at 6:00 AM
Email ThisBlogThis!Share to TwitterShare to FacebookShare to Pinterest
Labels: Reviews