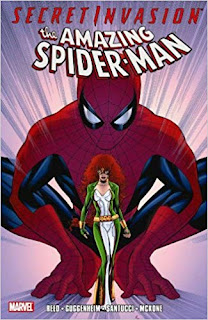 Tie-ins can be tricky things to write, because you have to tether your story into the core issues without stepping all over them. The tie-in Amazing Spider-Man issues during Civil War did a nice job of inserting Peter into the main story, replicating what parts they could of the main issues but also adding other layers of depth to Spidey's tale where Civil War chose to focus on other characters. It's a good blend and, together, the main Civil War story and the Amazing Spider-Man issues help tell a rounded story about the Web-Slinger. These issues are...not as good.

Written by Brian Reed with art by Marco Santucci, the first issue begins with a splash page explaining pretty much everyone the story’s going to follow: new red-headed hero Jackpot; a Super-Skrull with the combined powers of six of Spider-Man’s enemies (Rhino, Venom, Lizard, Electro, uhm…well, that’s honestly all I can tell from any of the images); Daily Bugle owner Dexter Bennett; Daily Bugle employees Robbie Robertson and Betty Brant; and police officer/Spider-hater/Peter's roomie Vin Gonzales.

The problems with the story begin immediately, and one caption on this page even acknowledges that fact. Highlighting Robbie Robertson, the caption claims he’s a “one-time street racer, which is not something anyone knew before today.” When a writer gives a character an ability they never possessed before because a situation demands someone have that specific ability, it’s called “plot convenience.” Acknowledging it as a plot convenience within the story doesn’t help make it any better, sorry.

The tale follows Jackpot confronting Dexter Bennett at the Daily Bugle offices because of libel printed against her in their paper, when a Skrull shows up disguised as Spider-Man looking for the actual Spider-Man. Not sure what the point of the disguise is, but he soon reveals himself as the Super Skrull and starts fighting Jackpot, screaming about wanting to know where Spidey is (hint: it’s the Savage Land, but nobody knows that). From there, Jackpt battles him and helps staff members of the Daily Bugle—Bennett, Joe Robertson, and Betty Brant—escape with Joe’s convenient driving skills. Oh, and Vin Gonzales joins them, seemingly out of nowhere.

At the same time, we’re treated to Harry Osborn and his girlfriend Lily Hollister, who themselves get attacked by various Skrulls masqueraded as Doctor Strange and Giant Man, except they’re still Skrulls, just dressed as superheroes. This part’s actually cool, in a visual sense, since it shows us what these aliens would look like if they combined with our favorite heroes. It’s a clever idea that, visually, looks really neat. Artist Leinil Francis Yu does a fantastic job crafting these Skrull/superhero mash-ups in the main Secret Invasion story, and the event is worth taking a look at if only for his illustrations and the big brouhaha at the end, which brings together all our favorite heroes against a Skrull army. This part of the story I do enjoy.

Stakes get raised as Harry and Lily are separated in an accident that Harry presumes has killed his girlfriend, and Jackpot is snatched away from the rest of Spidey’s supporting cast by the newest Goblin-foe, Menace. They battle in the air as the Super-Skrull nears the car. Now, this is one decent aspect of good writing in this miniature story arc: the Skrull believes one of these people is Spider-Man—and was initially drawn to the Bugle—because they all carry Spidey’s scent. This is a really good idea, considering they’ve all interacted with Peter Parker a lot—Betty is his friend, Bennet his former boss, Robby his editor, and Vin his roommate—and so of course all carry traces of him (which does make one question how well they all shower). Cool as this is, the Skrull can’t do anything about, as Jackpot kills two birds with one stone by directing Menace’s Goblin glider into the monster. Menace is gone, but the Skrull is left still standing. Another fight breaks out between the two, and Jackpot finally stops the rampaging monster by driving him into a freezer, where he’s turned into a popsicle.

Spidey finally shows up at the end of the story, to congratulate Jackpot for beating the Skrull. He also makes an appearance as Peter with his friends, where it turns out everyone’s okay, even Lily, who wasn’t actually killed. Now, one can argue this is Jackpot’s “baptism of fire” story, which if it is, then it’s fine. She does something heroic on her own and comes up with the win. Cool. However, it’s just told in a really clunky manner, with too much coincidence and forcing together of plot points and characters to feel coherent. I guess it just seems weird to hide this kind of story within the pages of a crossover tie-in, rather than in the main ASM line of stories itself. Granted, we’ve had one other tale focusing on her at the beginning of Brand New Day, but for a new character who’s supposed to be mysterious and is intended to make fans wonder “Is Mary Jane a superhero now?” it’s kinda sad she gets sidelined like this.

Jackpot returns for the next story in this volume, which is Amazing Spider-Man Annual #1, by Marc Guggenheim and Mike McKone. Until I started writing these blogs, I never realized how much Guggenheim did with these stories, and it almost disappoints me that he wasn’t handed the reins to write ASM as a solo act when the Brand New Day era was said and done. While I’ve read better writing in comics, he seems to be very passionate about Spidey and probably would’ve had some good stories to tell. This story is definitely better than the Secret Invasion tie-in, centering on Jackpot as she investigates a corrupt mogul named Walter Declun. Peter Parker, after an interview between Declun and Betty Brant, is suspicious of him too, but he’s even more suspicious of Jackpot, since a secret identity she gave him earlier, “Sara Ehret” turned out to be false. Breaking into her apartment, he comes into conflict with her before learning the truth: there is a Sara Ehret who got powers and should’ve been a hero, but decided not to be one, so the fake Jackpot bought her identity and started injecting herself with drugs to replicate her powers. Spidey, being the hero he is, stresses the dangers of drugs and delves into Declun, finding a connection between him and a supervillain named Blindside. He attacks the villain and is, ahem, blindsided by the guy and his supervillain girlfriend Commanda until Jackpot rescues him. Unfortunately, she’s touched and blinded by Blindside, and the chemicals he releases when his uses his power mix with the ones in her system and kill her. Cause that’s how science works, yep.

It’s not a terrible story. I really like the idea of someone wanting to be a hero so bad they purchase a heroic identity in order to do it, even though I can’t condone the drugs. And while I’m glad Jackpot’s story got fleshed out through the Secret Invasion issues and this Annual (considering how packed with subplots the regular ASM issues are already), the revelation of who she is and her sudden death seem quick. The story would have worked better if, somehow, it could have been included in the main tales. Admittedly, that stuff is packed to the brim already, but her inclusion in the stories more often (maybe further team-ups with Spidey) would have added a lot to her character. Granted, the story ends with Spidey giving the real Sara Ehret the opportunity to adopt this identity and become a hero on her own, which she will do, and that’s a great way to end it. However, it just seems that a story that began with “Hey, let’s have a red-headed hero who calls herself ‘Jackpot’ and really, really seems like Mary Jane with powers” turned into “Let’s have this hero turn out to be someone completely different because plot twists.” If Jackpot was more prominent in the Spider-Man world and didn’t just die like she did, it might have been a quality idea. Sadly, this seems like the real first misfire for the Web-Heads: a character with a lot of potential who doesn’t go anywhere, except for under the ground.
Posted by John "Zanziber" Rogers at 6:00 AM
Email ThisBlogThis!Share to TwitterShare to FacebookShare to Pinterest
Labels: Reviews