Marvel Zombies vs. Army of Darkness 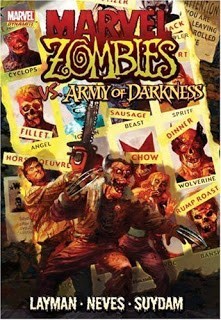 I thought Marvel Zombies was a trip—but this crossover is something else. For those who have not read the prior volumes, the basic rundown is in a parallel universe to the normal Marvel Universe, all our beloved Superheroes still exist…but as hunger-crazed denizens of the undead. Instead of using their superpowers to protect and serve, the zombies lured innocent victims into their chomping jaws, until they had exhausted the entire food supply on the planet, finally resorting to…other techniques to gain sustenance.

Marvel Zombies vs. Army of Darkness picks up following Ash’s story arc in Army of Darkness #13. I have not had the pleasure of reading any of the Army of Darkness comics, but I didn’t find myself lost with this graphic novel–basically, if you have seen the Evil Dead and/or Army of Darkness films, you should be fine. Ashley Williams, boomstick and chainsaw wielding S-Mart clerk and deadite banisher, lands in a New York City dumpster. Immediately, he is harassed by a deadite baglady (yes, a deadite baglady) who warns Ash that Earth 2149 will soon be destroyed. Ash, showing the finesse and lady skills that only Ash can, responds by punching deadite bag lady in the face. Soon, however, Ash realizes that he should have listened to the bag lady, and tries to enlist the Avengers for help. Once again, Ash’s particular brand of communication skills prove wanting, and lead the Avengers to think he’s a complete nutjob. Soon after, however, chaos ensues when Ash turns out to be right–when he crash landed in the dumpster, a zombie version of The Sentry came with…and has been hard at work, making more deadite Avengers.

With superheroes zombified, Ash takes matters into his own hand and decides that finding the necronomicon is the only way to end the reign of deadites. He runs into a few familiar faces (Spidey, the Punisher), but ends up hooking up with Dazzler and Scarlet Witch (naturally) to find the nasty book of the dead. More chaos, universe bending/time travel occur, more superheroes make appearances, and best yet–fans of the Marvel Zombies franchise get some questions answered concerning Reed Richards and how the zombie infection took hold (there is some cool role reversal stuff going on with Doctor Doom), and the origin of the infection.

This is a complete win-win scenario–if you love Ash J. (G.) Williams, you will be pleased, and if you like some black comedy with your Marvel heroes, you’ll be pleased. Heck, if you just like zombies, you’ll be ecstatic. This crossover has everything a fan could want. The writing is hilarious and captures the perfect blend of slapstick comedy with wonderfully disgusting zombies going to town on their unlucky colleagues. Another cool plus–as with the first graphic novel, this release contains more zombified classic covers (Ash included, naturally).

I didn’t think there could be much topping the hilariousness that was Marvel Zombies, but this volume takes the cake.
Posted by John "Zanziber" Rogers at 6:00 AM
Email ThisBlogThis!Share to TwitterShare to FacebookShare to Pinterest
Labels: Reviews