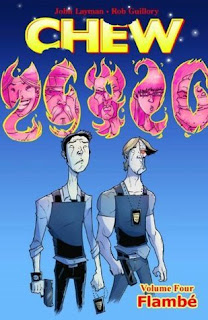 This series is bizarre but and filled with seriously dark humor but in such a fun way. The gist of the initial plot is that in the aftermath of bird flu (or possibly a government conspiracy) poultry meat is banned and chicken is a hot black market item. Tony’s psychic ability is triggered by whatever he ingests or tastes. He definitely tastes some strange and downright gross stuff along the way.

If the third volume was something of set-up for the future, then this volume puts a few more pieces into play behind the scenes as Tony and his partner John Colby continue to look into food-related crimes.  The problem for Tony and John is not only does their superior keep sending them on the most dangerous missions possible, but the alien writing in the sky, writing that no one can actually read (well….), is having the U.S. government shift money from the FDA and to NASA.  Hey, guess where Tony’s twin sister works?

But the bigger movements are with Tony’s various enemies, in the form of the “vampire” and his original FDA partner Mason Savoy.  So, while Tony and John deal with different types of food psychics, like the high schooler who can put mind control type stuff into food or the North Korean general who has some sort of bioweapon prepped that the USDA (a much more paramilitary type of group made up of women and animals), Savoy is looking for allies among people Tony knows and the vampire is doing…something else.

The added complication in this volume is the appearance of fiery writing in the sky in an unintelligible language. This makes the regulation of poultry meat rather unimportant but Tony Chu and his partner still have plenty of crime to investigate.

Tony’s family members continue to play increasingly more important roles. His sister was a great addition to this volume. There are also more food related special powers introduced. One character is brilliant but only as long as he keeps eating.

No doubt about it, this series just keeps getting better with every trade. From NASA, Tony’s sister assists him with a special case & it’s not wise to piss off Poyo.

The artwork by Rob Guillory is colorful and fun and manages to present some bizarre stuff in a way that isn’t completely gross.

I know it sounds a bit disgusting but I definitely encourage you to give this series a try.
Posted by John "Zanziber" Rogers at 6:00 AM
Email ThisBlogThis!Share to TwitterShare to FacebookShare to Pinterest
Labels: Reviews