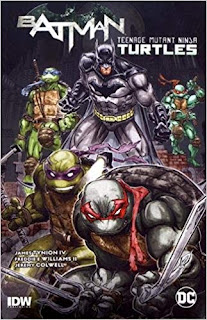 Instead of just trading on nostalgia or phoning it in, James Tynion IV takes the time to tell a genuinely interesting story.  The plot, at times boilerplate though it may be, actually unfolds at a believable pace. Things aren’t rushed, which makes the stakes feel real, and there’s enough action to punctuate the story without feeling derivative or tiresome.

Put simply, the story finds the Ninja Turtles in Gotham City, teleported there by the Shredder’s experimental dimensional transporter.  In a race to get home, and beat the Shredder there in the process, the Turtles team up with Batman to discover how they can get back.  There are several genuinely shocking twists along the way, not the least of which is when Shredder purposely destroys the portal that would take him home just so he can trap the Turtles in this dimension.  It was unexpected and great for that very reason, and it worked well with Tynion’s “ticking bomb” scenario: because mutagen doesn’t exist in Batman’s universe, the transformative ooze is slowly leaving the Turtles’ bodies.  Eventually, they’ll revert to being simple turtles… or worse.

The way the collection unfolds the story is interesting, in that it all flows as a single narrative.  There aren’t any chapter breaks or indications that an issue is ending or beginning, which makes for some seamless storytelling.  In that regard, I quite enjoyed it, as it felt like one whole story rather than six smaller chapters.  The price that was paid for that is a lack of credit pages, though, which are often just as much an artistic expression as the story itself.  It would have been nice if they had included the “unedited” title pages, even in the cover gallery at the end.

As good as the storytelling and plotting are, it’s the characters that truly shine.  No joke, this was the book that actually sold me on Tynion being the right man for the job on Detective Comics.  There’s tons of heart and humor, and the title characters feel like unique individuals.  Even secondary characters like Damian, Alfred, and Casey Jones make an impression in their small roles.

Some of the Turtles get more of a focus than the others, especially Michelangelo and Raphael.  Considering they are the emotional core of the group, that’s not really surprising; Mikey is each and every one of us, all wide-eyed and in awe of the world of Batman, and Raph is his usual tempestuous self.  Because of that, he’s central to the best scene in the book.

After storming off in a fit of rage, Raphael is intercepted by Batman.  Bruce takes Raph to Crime Alley, hoping to see that he truly empathizes with their situation.  It’s dialogue-heavy, yet there isn’t a single word that feels out of place.  When far too many people speak instead of listening, Batman reaches out to Raphael for understanding.  It’s a beautiful, quiet scene, and one that elevates the whole story in its effectiveness.

There needs to be some sort of technological expositor, so of course Donatello does the heavy lifting there.  As for Leonardo, he’s an unfortunate blank slate.  His stoic leadership isn’t much of a match for Batman’s more commanding personality, and he’s the first to feel the effects of the dissipating mutagen.  Leo does have the thankless role of the straight-laced leader, so his getting the short end of the stick isn’t exactly surprising, but disappointing just the same.

What’s nice about reading the series as a whole is seeing Freddie Williams’ pencils evolve and improve.  Strong as the storytelling was, the first issue was pretty rough from a visual standpoint: from the odd bodily proportions and the unclear perspectives, the look was just off.  Thankfully it got better as the story went along, to the point that it was genuinely good artwork overall.  I’m thinking animals and other beastial characters are his strong-suit, as the Turtles look consistently great.  Even from the start, when Batman looked a little weird, the Ninja Turtles were illustrated marvelously.  That skill pays off, too.

As bonkers as it gets at the end (and really, Batman’s Turtle-Bat armor still looks so incredibly silly), the book earns its ending.  Tynion took the time to tell the story he wanted, moving at a deliberate pace and focusing just as much on character as he did on the plot.  That makes the inevitable showdown between Batman and Shredder all the sweeter, with a brilliantly rendered fight that carries genuine weight.

Even veering into silliness, the story remains tonally consistent to the end.  Making a story where the Penguin turns into a literal penguin a genuinely moving experience is no mean feat, and suffice it to say this creative team accomplished that goal.

A massive cover gallery and sketchbook are included.  The gallery contains every cover and variant, along with some pencil drafts, and the sketchbook has some nice breakdowns of the character designs.  My personal favorite is the study page that shows the Turtles in proportion to Batman, along with detailed descriptions of the Turtles’ different head shapes.the cake.
Posted by John "Zanziber" Rogers at 6:00 AM
Email ThisBlogThis!Share to TwitterShare to FacebookShare to Pinterest
Labels: Reviews