Star Trek: The Next Generation/Doctor Who: Assimilation2 Vol. 2

Title: Star Trek: The Next Generation/Doctor Who: Assimilation2 Vol. 2 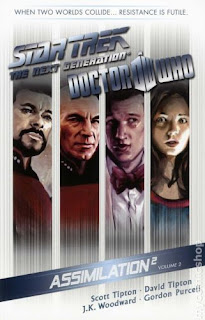 We are immediately thrust into the story with Picard and the Doctor discussing the Borg. Both men are on either side of the fence with the situation. And through a flashback to one of my favorite Star Trek episodes told by none other than Guinan (aka Whoopi Goldberg), the Doctor is informed as to why our brave Captain doesn’t trust the Borg and would never form an alliance. However, once they dig deeper and realize the Cybermen are attempting to convert the Borg and use all of their resources to take over the universe, the threat against the world becomes too great even for Picard to ignore.

The best thing about  Assimilation 2 Volume 2 is the characters. The illustrator aimed to make each character resemble their television selves, and I think it works in its favor. You can’t help but feel nostalgic or geek out when gazing upon the faces of Data, Worf, Geordi La Forge, or Matt Smith as the Doctor. Knowing you are heading into battle with your favorite characters, adds to the overall enjoyment of the story. The only downside is unfortunately you don’t get the conclusion to the story in this compilation. *sad face* You must wait until the next installment to see if their efforts work or if it was all for nothing.

Overall, Star Trek: The Next Generation / Doctor Who: Assimilation 2 Volume 2 is a must-read for any fan of either series. It’s engaging, highly entertaining, and will leave you wanting more long after you reach the end of page 72.