Star Trek: The Next Generation/Doctor Who: Assimilation2 Vol. 1

Title: Star Trek: The Next Generation/Doctor Who: Assimilation2 Vol. 1 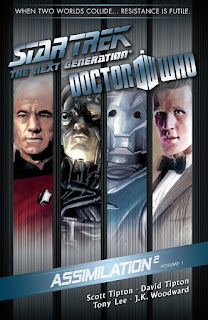 Two of the deadliest foes that either series ever faced join forces to terrorize various universes. Whenever worlds like these collide, the “why” is never as important as seeing how everyone’s favorite characters will engage with one another. The Doctor and Captain Picard are as different as two characters can be, and they interact exactly how you would expect. The story is enthralling and quick witted, aligning itself with the current incarnation of Doctor Who. The writing team of Scott and David Tipton with Tony Lee have a solid grasp of all the characters, and it doesn’t hurt that you already know how most of these characters speak in your mind. It reads as a fast paced episode of Doctor Who with a nice touch of Star Trek: Next Generation technology.

As a bonus, readers get a glimpse of a previous “generation” with another Doctor in one chapter that works to great effect. The change in art for this issue by the Sharp Bros. is a brilliant move as it shows the many contrasts of the older series with its sharp colors and straight forward action that a certain Captain and his crew are well known for. The throwback sequence is tastefully done with its bold and dynamic action with a touch of Mike Allred-ness thrown in for good measure. The rest of the series is painted by J.K. Woodward and Gordon Purcell which sets its own moods from planet to planet and from TARDIS to Enterprise. The moody coloring and portrait-like shots of the characters shows off the many worlds these adventurers are exploring as they uncover the mystery of the deadly alliance of Borg and Cybermen. As the tale progresses, the debate of who is worse begins unfolding for The Enterprise crew and The Doctor and his companions.

Staying true to form, there are no easy answers for anyone. The Tiptons and Lee have really shown the right amount of heart, emotion and honesty from the Doctor’s side as well as showing the wit and big questions fans know from the Next Generation crew. The creators leave good hooks at the end of each chapter just like in any long form story telling to keep you wanting more. It wouldn’t be a bad thing were they to release the series weekly or bi-weekly like the TV shows they are portraying as fans appetites have become harder to satisfy. Whether you’re a fan of Doctor Who, or TNG, or even if enjoy a good sci-fi adventure, this book is loads of fun on all fronts.
Posted by John "Zanziber" Rogers at 6:00 AM
Email ThisBlogThis!Share to TwitterShare to FacebookShare to Pinterest
Labels: Reviews