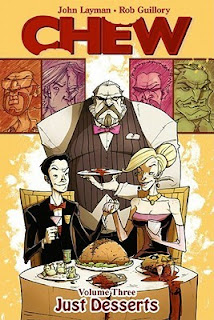 Detective Tony Chu has a disgusting, but useful, superpower. He is a Cibopath, who gets psychic impressions from the food he eats. While this tends to ruin hamburgers for him, since he knows too much about the suffering of the cows, Tony can also use his ability to tell how a murder victim died by eating part of their corpse. It's not fun, but it gets the job done.

Lately things have been looking up for Tony. He is now employed as part of the Special Crimes Division of the FDA and has found a way to get along with his boss, though they still don't like each other. Tony has a brand new prosthetic ear, and a love interest; Amelia Mintz, a journalist and former food critic with a superpower of her own. Amelia is a Saboscrivener, able to make her readers literally taste the food she writes about, which allows Chu to actually enjoy the flavor of food without the usual psychic baggage that comes with it.

In this volume, Chu and his cyborg partner at the FDA are called in to investigate the murder of the son of a senator who was helping Chu's girlfriend Amelia with a story on an exclusive dining club whose members eat endangered species. He also has to look into a cock fighting ring, investigate a mysterious new substitute for chicken that tastes suspiciously like the real thing, and deal with the reappearance of the formidable fugitive former FDA agent and fellow cibopath, Mason Savoy.

It was nice to see Savoy reappear, with his characteristic verbose dialogue, and I hope to see more of him in later volumes. It was interesting to see Chu's relationship with Amelia start to deepen, along with his partnership with John, the cyborg. This volume also introduced some new characters, including some of Chu's extended family. Most of the stories in each chapter are self contained, but the last one ends with a few unanswered questions to keep readers coming back for more.

Chew has an original concept and an intriguing plot with plenty of twists and turns. It's sometimes gruesome, and often blackly funny. The art in this volume is as good as ever, though the blood and gore won't be to everyone's taste