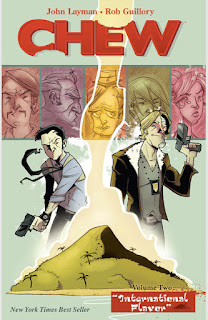 The thing about Chew that makes it even more special is that it is not afraid to keep on taking the story further. It’s pretty unusual to begin with – Tony Chu is a cibopath, someone who can pick up psychic impressions from anything he eats, who works as an agent of the FDA, now the most powerful agency in America after a bird flu epidemic killed millions, making chicken illegal. But Layman doesn’t stop there in this new collection: he brings back Chu’s old partner, who now has robotic parts on his face and chin; a USDA special agent has a ‘specially trained rat named “Jellybean” equipped with miniature cameras and parabolic microphones for surveillance’; there is a ‘cibolocutor’, a man who communicates solely through cooking; and there is fruit that, when cooked, tastes exactly like chicken but is actually from outer space. This is the sort of stuff that comic books do best.

The book isn’t all about the wonderful craziness – Layman has interesting characters and well-plotted storylines. The cast are funny and odd and strange and intriguing; the dialogue has a rawness and a reality and a unique feel to it; and the story takes unexpected turns that keep you wanting more. It’s bizarre and oddball book, but in all the good ways, and I’m really glad that it exists, and it was wonderful news when it won the Eisner award for Best New Series.

The other important contribution to the book is the art of Guillory, which suits the tone of the book perfectly; his art style, which feels like a mixture of Ben Templesmith and Jim Mahfood, creates the ideal reality for the balance of oddness and realism can exist without clashing. His people all look like complete individuals, none more obvious in the difference between Chu and his older brother, even though you can see the similarity. Together, these two artists make such a good book that it’s enough to tempt me to buy the individual issues, just so I can get the story quicker.
Posted by John "Zanziber" Rogers at 6:00 AM
Email ThisBlogThis!Share to TwitterShare to FacebookShare to Pinterest
Labels: Reviews