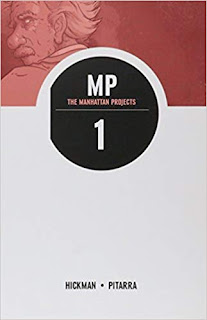 How to review a trade paperback without giving away the plot? The Manhattan Projects is a bonkers mix of science, conspiracy, aliens, Nazis and cannibalism. It is geek heaven, with geek heroes and geek references and all the stuff we all love. It is inventive, has more imagination than most mainstream science fiction films and books, plenty of grizzly gore and yet doesn’t take itself so seriously that you can’t just enjoy the ride. Which you will…

Ok, so maybe a bit more is required to explain this collection by Jonathan Hickman and Nick Pitarra. This is the opening; part 1 if you will. I suggest you discover the rest for yourself.

In our universe, the Manhattan Project was the research program that produced the first atomic bomb during World War II. The project was under the direction of Major General Leslie Groves, who plays the same role in this alternative history. Robert Oppenheimer also plays a pivotal role in both reality and fiction. In Hickman’s universe, the team is made up of Einstein, Fermi, Feynman and other famous scientists.

Our story starts with Groves recruiting Oppenheimer and informing the latter that he has free reign for his projects. He also explains that the atomic bomb project is only one strand of science under investigation. More ‘fringe’ sciences are the real mission. While Groves is showing Oppenheimer around the facility, they are attacked by Japanese robots sent by psychic Buddhist death-monks, which highlights the point nicely. The good Doctor dispatches the robots in a highly quirky and relevant way. This introduction is weaved in with Robert’s childhood, growing up with his evil twin, Joseph (not real) and younger brother, Frank (real). This jumping back and forth through time is a key feature throughout the edition, as people aren’t what they seem, and our protagonists’ back-stories explain the present to the reader. It is not a spoiler to say that Joseph becomes a serial killer, as this happens very early on in the book.

We move over to Germany, where Hitler is interacting with a scientist who has a robotic arm. Then it gets really bizarre: alien visitors; dead scientists and American presidents playing important roles; and traveling between parallel universes. Suffice it to say that there is enough on every page, and in almost every panel, to keep any science-geek or science fiction fan interested.

Praise must go to Hickman, whose imagination has leaked onto the page. Best known for the Image Comics series The Nightly News and Pax Romana, as well as writing for Marvel, his writing is sharp and witty and packed full of nods to classic science fiction and the formative days of modern physics. The characters all have great personalities, caricaturing their real world equivalents. However, you could probably know nothing of the scientists such as Fermi and Daghlian and still get a sense of how they interacted within the real world. There is a little history lesson sneaking into the story.

The artwork by Nick Pitarra is, for my taste, slightly odd. Everything has a slightly grainy, rough feel to it. It is interesting, however, and fits the story and characters well. Each real world character looks like he should, and the aliens are truly alien. The gore, when it occurs, is suitably nasty without feeling exploitative. His style is original and flawless and definitely gives you the sense that this is not the world we live in. He’s also worked with Hickman on Marvel comics and they clearly complement each other well. As for everyone, art is a personal experience. To make it clear, there is nothing wrong at all with Pitarra’s work. It suits the story and matches the imagination of Hickman’s story.

I can’t wait to read more from The Manhattan Projects.