East of West Vol 5: All These Secrets

Title: East of West Vol 5: All These Secrets 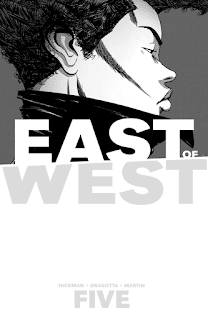 I was one of the few fans out there that was late to the East of West party. The series was already three graphic novels deep by the time I picked up my first trade and it wasn’t long before I caught up with the rest of the comic loving world.

Hickman has built as series that rivals George R.R. Martin in political intrigue and violence, the difference being the heavy Sci-Fi bend to the tale that Hickman tells. If there was ever a decent alternative to Game of Thrones then East of West would be it. There is layer upon layer of betrayal and conspiracy. Every character that we meet is nothing more than a pawn on a larger chess board to be moved around at Hickman’s whim, and at times the reader themselves become a pawn in the game, lead to throw favor to one character only to find that their own loyalty is misplaced and better served to be saved for another camp of characters. It would take five thousand words to properly summarize a work of this scope, and let’s face it, if you’re not reading this title this is not the volume to jump in. That would be the equivalent of doing a cannonball in the middle of a half-finished swim meet. It accomplishes nothing and you end up looking like an ass for trying. New readers need to seek out volume one and start at the beginning.

As for readers who are familiar with the world that Hickman has built through the previous 19 issues, you’re getting more of the same, but now the stakes seem higher as war looms on the horizon for all the nations and characters involved. We watch as political leaders try to grasp at the fading strands of peace before the unstoppable ending starts; you can guess at their success.
There are a handful of high points in this graphic novel, a fair share of them belong to the beautiful artwork of Nick Dragotta, who does not fail to impress with every panel. His unique style has been a cornerstone for the series and maintains its high quality in this volume.

As for the plot, there are also a handful of great moments. I’ll give a short description of each here but the over-all plot is far too extensive to cover in one small review. I suggest that you read the book for yourself if you’re experienced with this series.

There is more than enough here to warrant a purchase. The thick plot will take multiple read-throughs to understand and digest all of the finer nuances hidden throughout. Making this volume a value at its low price point, and a fine edition to bookshelves across the world. I give this a high score and hope you enjoy.
Posted by John "Zanziber" Rogers at 6:00 AM
Email ThisBlogThis!Share to TwitterShare to FacebookShare to Pinterest
Labels: Reviews